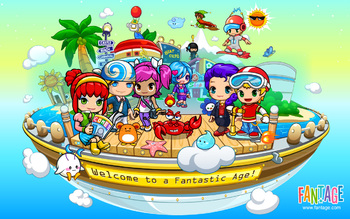 Fantage (pronounced Fan-Tay-J) was a popular free browser social MMO aimed at kids. Created in 2008 by Fantage Inc., Fantage was created with the purpose to provide a fun safe virtual playground for kids but ended up attracting people outside its target demographic and becoming a cult classic. While it was considered a rival to Poptropica, it was still rather unique game on its own.
Advertisement:

The game featured you controlling a fully customizable animesque avatar and exploring the island of Fantage (short for Fantastic Age), a place run for the most part by kids. Being a social MMO, there was a lot more focus on socializing with friends (and making new ones) than other virtual worlds for kids. That said, games were still important, because winning games gave you stars, which werre then used as currency. The currency could be used to buy aesthetic items such as outfits, accessories, costumes, and flying skateboards.

The game is generally separated by fans into two eras: Old Fantage and New Fantage. Old Fantage lasted from 2008 to 2013, and featured more emphasis on playing games within the MMO, and interesting events. When the developers noticed the popularity with the older crowd, they changed the game so that it could focus more on social interaction and customizing. While both versions of the game started out extremely popular, Fantage started losing a lot of its player base to other, more popular, free games. Eventually, the entire game shut down permanently in 2018, going out with a bang by giving everyone free premium accounts for the last week.