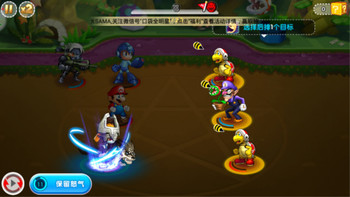 mid-2016, just at the time when the news about the unofficial mobile port of Splatoon (renamed Sepia Go!) was still fresh in Nintendo fans' minds. The backlash is obvious; as mentioned before, this game is an unlicensed mobile game that uses copyrighted characters without permission... and the developer expected some profit made out of this game, being a free-to-play MMO and all. Obviously, this game is hosted on a third-party app store.

Much like many Chinese unlicensed games which take the form of mobile MMORPG featuring copyrighted characters, the game runs on a typical MMORPG template whose in-game features include the single-player campaign "Adventure" mode, an "Arena" mode where players can raise their Arena ranking by battling other players' teams, the "guild" system, a "Boss Battle" mode (versus Bowser), a "bounty hunt" mode, an augment-based stat-boosting system, stored EXP system, loads and loads of currencies, and many, many more. The premium currency for this game is the Rupee-like Jewels, and that's where the "in-app purchase" part comes in.

How does the battle system work? A battle consists of, assuming full teams, a 6v6 fight (3 front, 3 back) with a predetermined round limit. Outside of certain occurrences, the player's team will always go first, starting with the fighter on the first slot, followed by the enemy's fighter from their first slot, then the player's second fighter, the enemy's second, and so on until the sixth member before ending a round. The next round plays the same until all fighters from one of the sides are knocked out or the battle reaches its max round count. Fighters make a move on their own, except if their blue gauge is full, which allows them to unleash a special skill whose target can be decided manually by the player (automatic decision anyway if the "auto-battle" is toggled on). Speaking of skills, there's a kind of special skill that can only be triggered if a team features two fighters that are compatible with each other. Damage power from this skill depends on the player's touch timing when the skill is being activated; the better the timing, the higher the damage.

The game's servers had been shut down on January 16, 2017 due to "financial problems"

according to the developer. Prior to this, registration for new players had been closed on December 11, 2016. To compensate for this, players interested in its Spiritual Successor Fighter Utopia, or better known as Chaos Fighters 2 (itself presumably an unofficial sequel to Coco Games's Chaos Fighters), would be able to receive a special gift upon registering in that game as long as they confirm the developer by proving that they're a former Pocket All-Star player (limited time only). As for this game? Thankfully it has sunken down into obscurity.