Animation / Monkey King: Hero Is Back 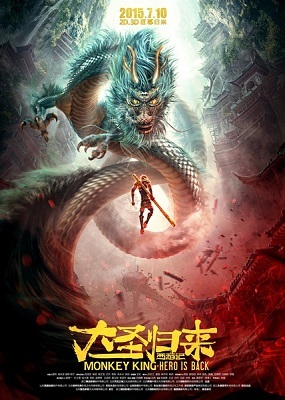 Monkey King: Hero Is Back is a 2015 CG-animated Chinese film from first-time director Tian Xiaoping. It was also the highest-grossing animated film released in China, surpassing Kung Fu Panda 2, before being surpassed in turn by Kung Fu Panda 3 (the record is currently held by Ne Zha).

A retelling of the Chinese classic Journey to the West, the story follows the all-powerful Monkey King who once roamed freely between Heaven and Earth, but after angering the Gods, he was imprisoned within an ice cage deep within the mountains. 500 years later, monsters attack a small village and Jiang Liuer, a child flees to the mountains. Unknowingly, he releases the Monkey King, otherwise known as Sun Wukong from his curse. With the help and encouragement from this special child, Monkey King saves the village from the evil monsters.

The film received an American release on July 29, 2016, with Jackie Chan as the Monkey King.

A video game based on the film called Monkey King: Hero Is Back was developed by October Media and Sony Interactive Entertainment, and published by Oasis Games.

Alternative Title(s): Journey To The West Hero Is Back