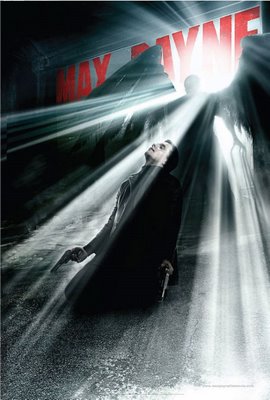 "Remember when you were a kid and you'd hold your breath when you run past a graveyard?"
"The Devil is building his army. Max Payne is looking for something that God wants to stay hidden. That is what makes him more dangerous."
Advertisement:

Max Payne is a Film Noir action film from the year 2008. Somewhat loosely based on the video game series of same name, it was directed by John Moorenote (who also did Behind Enemy Lines, The Flight of the Phoenix (2004), The Omen (2006), and A Good Day to Die Hard) and it stars Mark Wahlberg, Mila Kunis, Beau Bridges and Ludacris.

Unlike the game, in this adaptation the framed fugitive undercover detective Max Payne is a cold case detective, who is obsessed with finding the killer of his wife and child. His personal investigations get him involved in the killing of Natasha Sax and his fellow detective Alex Balder by the ex-marine Jack Lupino. Natasha's sister Mona, convinced that Max is the perpetrator, sets her sights on him. After the things clear up between them, they form an alliance to solve Natasha's murder and its link to the designer drug Valkyr which has been flooding the streets.

The film provides the examples of: