The spoilers were like an old road map, the blood of my wife staining the grids. I could see some of the streets, but others were a blur, blotted out by crimson smudges. I guess you can't know what's coming every step of the way. Ruins the "fun" of experiencing it. 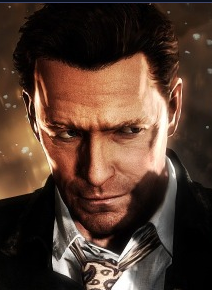 Click here to see Max in the first game 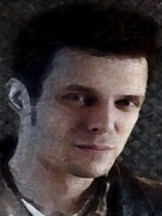 Click here to see Max in the second game 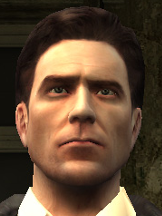 "After Y2K, the End of the World had become a cliche. But who was I to talk, a brooding underdog avenger alone against an empire of evil, out to right a grave injustice. Everything was subjective. There were no personal apocalypses. Nothing is a cliché when it's happening to you."

The titular protagonist. A former NYPD detective and DEA Agent, his wife and daughter were murdered by junkies three years prior to the events of the first game. This causes him to go undercover hunting for the source of the drug, 'Valkyr'. In the second game, he returns to the NYPD and crosses paths with Mona Sax, an assassin that he falls in love with. Three guesses as to how that went. The third game takes place a decade later, with Max having left the NYPD to pursue a life in private security in São Paulo, Brazil. As with most of his career moves, it ends only in blood and tears. (Emphasis on the former.)

Max's wife. She worked at the New York D.A.'s office before she was murdered for getting too close to the Valkyr Conspiracy.

Max's baby daughter. Like her mother, she too is a victim of the Valkyr conspiracy. 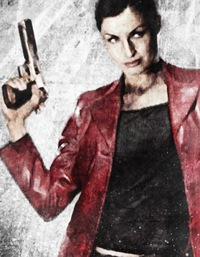 The sister of Lisa Punchinello, wife to Angelo Punchinello, head of New York's largest crime family. She's also an assassin working for the Inner Circle, and Max's equal in combat. Over the course of the second game, she falls in love with Max. 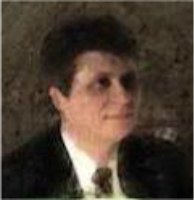 The head of the Punchinello Crime Family, the top mafia family in New York during the first game. The Punchinellos control the distribution of Valkyr, a designer drug in high demand. 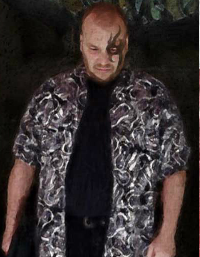 "The flesh of fallen angels! Come to me, all!... Astaroth, Beelzebub, Asmodeus, Baphomet, Lucifer, Loki, Satan, Cthulhu, Lilith, Hela! Blood to you all!"

A high-ranking lieutenant in the Punchinello Crime Family with some serious issues. He's used so much Valkyr it's permanently twisted his brain, making him a psychotic occult fanatic that conducts his rituals in the back rooms of his nightclub, Ragna Rock. 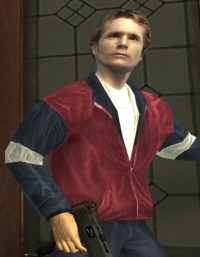 A mid-level, high-strung Mob boss whom Max pumps for information. Max muses that Vinnie is a pushover with no leadership skills. After being spared by Max in the original, he returns in the second game, now the leader of his own gang. He is the process of waging a war against Vlad and his men. 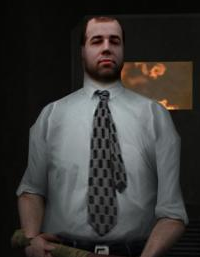 "I love to watch cartoons. Cartoon violence's a fascinatin' thing."

An assassin hired by the Punchinellos to hunt down and kill Max. Has a love of violent comic strips such as Captain Baseballbat-boy.

Don Punchinello's notorious henchmen, a trio of killers that guard him at his mansion. 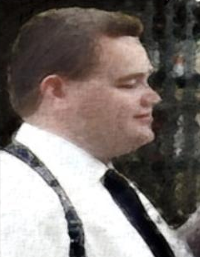 A hitman hired by Punchinello to oversee a Valkyr deal going down in Lupino's hotel. He meets his end at Max's hands at the hotel bar soon after getting serviced by Candy Dawn. 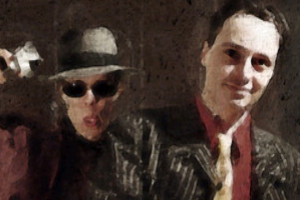 Joey: Ladies an' gentlemen, it's the Pain in the butt!
Virgilio: Pain to the Max!

Two mobsters in charge of Lupino's hotel which is a front for most of his operations. They're the first two mobsters to try and kill Max. 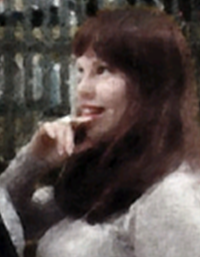 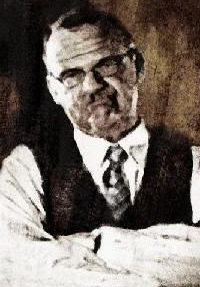 A by-the-book cop whose seen it all, done it all, and drank it all in a long and storied career. Hunts Max throughout the first game while he's undercover and is his immediate superior in the second. He's a deputy chief in the first game, and a lieutenant in the second, presumably getting promoted for his hand in bringing Max in and handling the bodies he left behind. 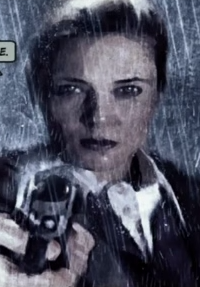 "Stay away from my case, Max. Stay away for your own good!"

A respected female detective and Max's partner in the NYPD in the second game, though they don't get along. Max discovers she's been keeping secrets over the course of the game. 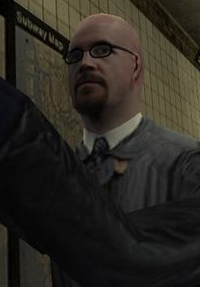 Voiced by: Chris Phillips
"Come on, Max. The fine and noble degenerates of this town are not going to catch themselves."

Max's best friend and long-time partner in the DEA. His murder at the start of the first game kicks off Max's one-man crusade against the Punchinello family. 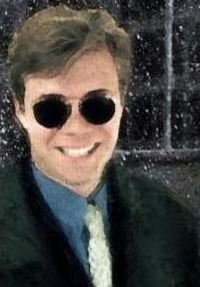 A smarmy DEA agent and Max's other squadmate, the one who sends him and Alex to Roscoe Street Station. After Alex is shot and Max's cover is blown, we don't hear much from B.B. until the third act, when Max realizes that B.B. was the one who killed Alex and ratted them out. 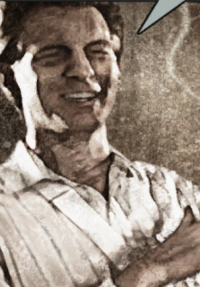 "I'm going to make you an offer you can't refuse... I've always wanted to say that."

A charming Russian crime boss that comes to Max's aid in the first game, they engage in an Enemy Mine circumstance, Max freeing up a shipment of Russian arms for him in exchange for the firepower to fight Punchinello. In the second game Vlad claims to have gone straight and is opening a nightclub on the ruins of Lupino's bar, but is obviously not as clean as he likes to claim.

"You are the sheriff? Well, how about making me your deputy?"

Lem's second-in-command that thinks he's in a Western, he's fighting his way to rescue Vlad from Vinnie and joins Max in the hunt. 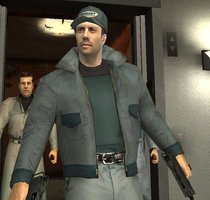 An elite member of the Cleaners. 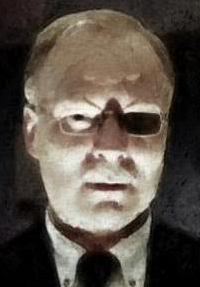 "We need you to take her out. Afterwards we can protect you, make all the charges go away."

A United States Senator with ties to the Inner Circle, a very old and powerful secret society/criminal syndicate. He contacts Max offering aid against Nicole Horne. 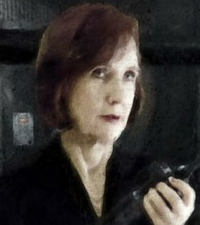 "All this because your wife stuck her nose into things that were none of her business."

The CEO of Aesir Corp., a rich and influential pharmaceutical corporation. An utterly cold and ruthless woman with an army of mercenaries at her command. She betrayed the Inner Circle and attempts to seize New York for herself with the aid of the Punchinello crime family and the designer drug, Valkyr.

"I am a legitimate businessman and a proud member of my community. Drugs are a scourge and, as a parent, I pride myself in having nothing to do with them."

During a drunken dispute in a bar in Hoboken, Max kills Anthony DeMarco's only son. DeMarco promptly sets out to waste Max, sending dozens of armed thugs against him in a berserker rage. 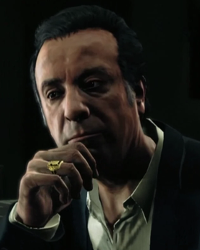 "Sometimes it feels like I have done nothing apart from being a rich man, in a poor country."

Max's new boss in São Paulo. He is an industrialist who is paranoid about kidnapping attempts. 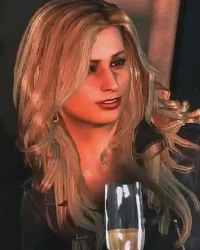 Rodrigo's trophy wife and the subject of the kidnapping attempt in the third game. She's killed during the rescue about midway through. 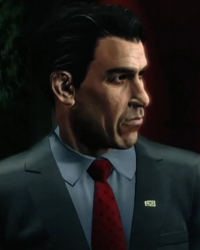 Voiced by: Robert Montano
Max: "Guy was smoother than an oil slick on an iceberg and about as toxic."

Rodrigo's brother. He is a local politician that wants to clean up the city. In actuality, he is the mastermind behind a human organ trafficking ring, and the Big Bad. 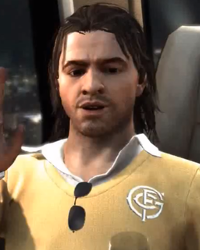 Voiced by: Dillon Porter
Max: Who do you think is targeting your family?
Marcelo: Haters!

Rodrigo and Victor's younger brother, he is a party-loving playboy. 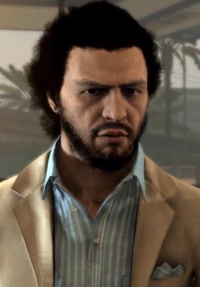 Voiced by: Julian Dean
Max: "I might have written the book on bad ideas, but Passos wasn't afraid to quote from it."

A friend of Max's from the police academy. He offers Max a private security gig in Sao Paulo, which is what prompts Max to leave New York. 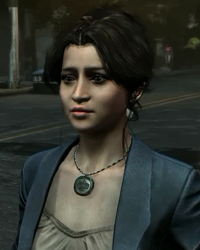 Fabiana's younger sister, Giovanna lives in two worlds. By day, she's a social worker in Sao Paulo's impoverished lower-class neighborhoods, but by night, she parties with her sister in Sao Paulo's night spots.

Da Silva is a reasonably honest cop and a family man in Sao Paulo, which requires him to have a certain amount of moral flexibility. He's an unexpected ally to Max after Fabiana's kidnapping. 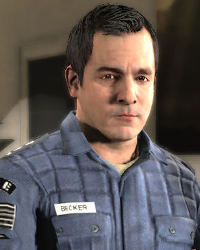 Becker is the commanding officer of the Unidades Forças Especiais (UFE), a spectacularly corrupt special police organization in Sao Paulo.

Bachmeyer is the second-in-command at Unidade de Forças Especiais, and the right-hand man of Becker.

Serrano is the leader of Comando Sombra, a powerful São Paulo street gang with ties to South American drug cartels. He and his gang kidnap Fabiana Branco in the hopes of collecting a hefty ransom from her wealthy husband.

Neves is the commander of the Crachá Preto, a company of mercenaries composed of former cops and military men.

A somewhat famous plastic surgeon, and apparently an acquaintance of Branco family. He is also involved in Organ Theft ring ran by Crachá Preto and UFE, by performing the actual organ-removing surgeries.

The central hero of a popular comic strip and television show, Captain BaseBallBat-Boy fights the forces of Maxwell's Demon with his trusty bat.

An American ex-cop, who Max stumbles upon in some unlikely places during his romp in Brazil. He is essentially what Max could have been if he had a chance to live a normal life.

Max's neighbour in Hoboken after his retirement from the police. He died during the mafia attack in a suicide explosion, taking several of mafia goons with him.

A sleazy American tourist that Max encounters after the shootout in the strip club in Chapter 7. Max later meets him again at the UFE station in Chapter 13.