It Is Not Your Time 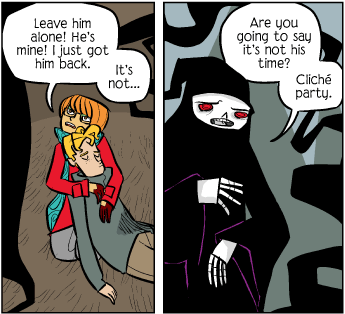 The Grim Reaper himself is a little cynical about the phrase.
"I think I'll find another way
There's so much more to know
I guess I'll die another day
It's not my time to go"
— Madonna, "Die Another Day"
Advertisement:

On the brink of death, a character is told that he must go on because it is not his time to die.

It tends to play out something like this: Bob is seemingly offed. But wait! He's in the next scene, and in some kind of overexposed or soft-lit white expanse, perhaps with fluffy clouds. Here, he is usually greeted by a dead loved one (or several), but sometimes he is visited by some form of Death, or some form of God, an angel, or any other appropriate gatekeeper. Ultimately, however, Bob and his visitor's interactions boil down to this: "You cannot go yet, Bob. It is not your time."

Alternatively, the visitor will tell Bob he has the choice of whether he goes with them or returns to the living. Bob goes back to the living almost invariably, and it's probably exactly what his visitor expected to hear.

A Stock Phrase and subtrope of Near-Death Experience. Might be a Disney Death from the point of view of the character experiencing it.

Remember, this is a death trope, so there will be unmarked spoilers.

Just when Constantine is about to enjoy Heaven with Zatanna, she sends him back so he can help his friends.

Just when Constantine is about to enjoy Heaven with Zatanna, she sends him back so he can help his friends.