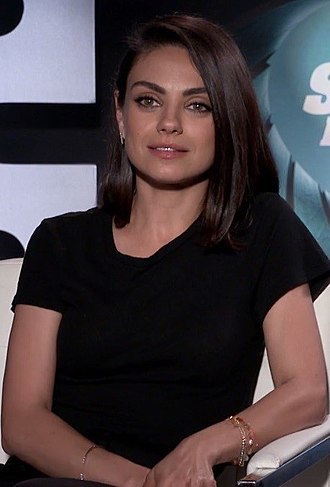 "I love playing different characters and I love doing fun things and I love to entertain people, whether that be in a comedy or a drama. If I get you to laugh or I get you to cry I'm super stoked, as morbid as that might sound."
Advertisement:

She was born in Ukraine, then part of the Soviet Union, to a family of Russian-speaking Jews. Her family moved to the U.S. after the fall of communism. In the '90s, she appeared in small roles in TV series (Baywatch, Walker, Texas Ranger, 7th Heaven) and films (Piranha, Santa with Muscles, Gia). Her breakout role was of Jackie Burkhart on That '70s Show, which ran from 1998 to 2006. In 2001 she had a minor role in the romantic-comedy Get Over It. Kunis is now known as the voice of Meg Griffin on Family Guy, replacing the original voice actress Lacey Chabert.note While Chabert voiced Meg in the show's first season, some leftover episodes cropped up in season 2, making the change between Chabert and Kunis awkward as the leftover season 1 episodes that were in season 2 aired mixed with the season 2 production line. "Da Boom," the episode in which The Griffins try to survive in a Quahog that has been ravaged by the Y2K disaster, was the first aired episode to have Kunis as Meg. The lone exception is "There's Something About Paulie," an episode produced for the first season, but aired so late in the second season (and Meg had so few lines) that Kunis re-dubbed Meg's lines.

She appeared in films during her run on That '70s Show, but her career only took off after the series ended. In 2008, she starred in the Romantic Comedy Forgetting Sarah Marshall, co-produced by Judd Apatow. In 2009, she appeared in the film adaptation of Max Payne, and Mike Judge's comedy film Extract. In 2010, she starred in the post-apocalyptic action film The Book of Eli alongside Denzel Washington and had a small role in the comedy Date Night. Her next film was Darren Aronofsky's ballet drama Black Swan, where she played Natalie Portman's rival. In 2011, she starred in the romantic comedy Friends with Benefits along with Justin Timberlake. In 2012, she appeared in Seth MacFarlane's directorial debut, Ted. In 2013, she appeared in the fantasy film Oz the Great and Powerful, Sam Raimi's take on a prequel to The Wizard of Oz lore.

In 2015, she appeared in Jupiter Ascending, a Science Fiction film directed by The Wachowskis and co-starring Channing Tatum. In 2016, she starred in the comedy Bad Moms; in 2017, she appeared in its sequel, A Bad Moms Christmas. In 2018 she costarred with Kate McKinnon in The Spy Who Dumped Me. In 2019, she had a voice role in the animated film Wonder Park.

She has also appeared in a few music videos (most notably "Jaded" for Aerosmith), voiced Tanya Winters in the video game Saints Row, and serves as a commercial spokesperson for Jim Beam bourbon.

She's married to former That '70s Show costar Ashton Kutcher and they have two children together.

Kunis and her work provide examples of: