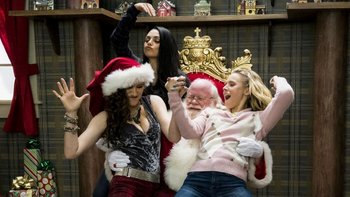 The holidays are getting stressful for overwhelmed moms Amy, Carla and Kiki when their mothers visit for the holidays, Amy celebrates a simple Christmas with Jesse and their kids until her mom Ruth (Christine Baranski) controls every aspect and takes over Christmas, Kiki's mom Sandy (Cheryl Hines) is clingy and oversteps her boundaries and Carla's mom Isis (Susan Sarandon), whom she hasn't seen in years, is between jobs but wants to spend time with her nonetheless. Amy, Kiki and Carla vow to take Christmas back for themselves.

This movie contains these tropes