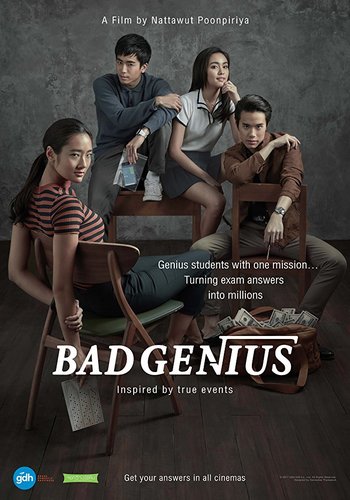 Ready to pay for A's?From left to right Lynn, Bank, Grace, and Pat
"Don't you see — even if you don't cheat, life cheats you anyway."
— Lynn
Advertisement:

The film centers around Lynn, an intelligent Scholarship Student at a prestigious high school. She first helps her Book Dumb friend Grace cheat on an exam so Grace can keep her grades up enough to act in the school play. Grace's wealthy, unintelligent, but opportunistic boyfriend Pat convinces Lynn to help a group of people with their grades — they will, of course, each pay her a hefty sum per subject.

Realizing how lucrative profiting off sharing exam answers can be and dismayed at the large amount of "tea money" her working-class father paid the school for her acceptance, Lynn agrees. Also in the mix is Bank, Lynn's fellow Scholarship Student and rival for a coveted college scholarship, who begins to suspect the cheating going on. Events later escalate into Lynn, Grace, Pat, and Bank attempting to steal the answers to the STIC (an international standardized test to get into foreign schools, analogous to the SATs) and making millions off of it, possibly at the expense of their moral integrity.

Compare The Perfect Score, another film about stealing the answers to the SATs. Not to be confused with Evil Genius.