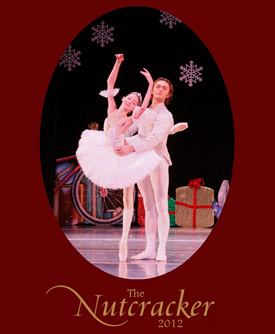 The familiar ballet based on Alexandre Dumas's adaptation of E. T. A. Hoffmann's The Nutcracker and the Mouse King. The plot is much simpler than Hoffmann's story: A young girl, Clara ("Marie" in the original and "Maria/Masha" in current Russian adaptations) receives a toy nutcracker for Christmas. That night, after the festivities are over, she creeps into the living room to see him one more time — and witnesses a battalion of mice invading the house, led by the seven-headed Mouse King. The Nutcracker, suddenly animate and sentient, rallies his forces to defeat them (in most versions Clara's thrown shoe turns the tide). The Nutcracker transforms into a handsome prince and invites Clara to visit his palace in the Land of Sweets. There, the residents of that magical world entertain them with several musical numbers. Then Clara wakes up and realizes it was All Just a Dream.

The score by Pyotr Ilyich Tchaikovsky is extremely well-known, and both the complete ballet and the shorter "Nutcracker Suite" are perennial favorites for Christmastime performances. This entry

at the Other Wiki lists some of the more popular takes on the ballet.

There have been quite a few feature-length adaptations as well, many reincorporating elements of the original Hoffman story, and two straight film adaptations of the ballet itself.

Perhaps most notably, the music from the Nutcracker Suite was prominently featured in Disney's Fantasia, though without any of the ballet characters.

The ballet provides examples of: