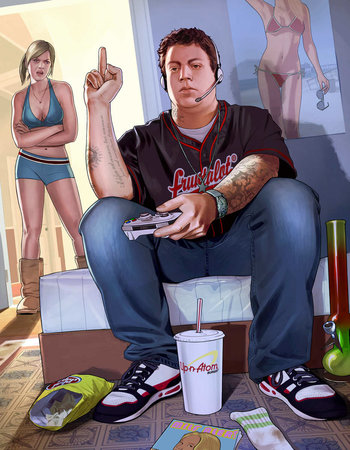 "Dumbass!"
— Red Forman towards his son Eric (usually Once per Episode), That '70s Show
Advertisement:

A standard sitcom family usually has one or more of the following: the reasonable mom, the obnoxious little brother/sister, the "misunderstood" teen girl, and the stupid loser dad. Of course, to round out the nuclear sitcom family, there's one more element needed to balance out the 2.4 kids...

As the name suggests, the character is male, a teenager, and incredibly stupid. Growing up and hitting puberty appears to have caused him to sacrifice some IQ points for height and hair. Often looked at with disdain by the rest of the family who view him as an annoyance at the worst of times, the Dumbass Teenage Son is often times easily tricked or manipulated by his other family members, even those younger than him. He has no aspirations of getting an education or a "real job", usually thinking about becoming a rock star despite lacking in musical talent. Sometimes, this character tends to pepper his sentences with Totally Radical phrases like "Dude!" or "Awesome!".

Dumbass Teenage Sons are common in sitcoms but can be found in other genres as well. Sometimes they are shown to be Book Dumb or knowledgeable about certain things others don't know, but not all the time. Other times, they're average or slightly above academically but naive at first, and then get Flanderized into a box 'o rocks. They are rarely if ever the Main Character or get focused on unless it's being viewed with contempt by the rest of the family. May overlap with Dumb Jock if said teenager is portrayed as dimwitted but athletically fit, or Kiddie Kid if he acts childish in addition to being stupid. If he grows up and doesn't grow out of it, he's likely to become a Basement-Dweller and/or a Manchild.