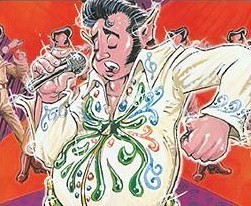 The incongruity between the decidedly ethereal and long-lived elves and the earthy and very much mortal and hedonistic Elvis Presley arguably just makes it funnier. Of course, some versions of elves are earthy and hedonistic, in which case it makes an awful lot of sense. And sometimes this is all an act designed to let them steal human children, which just proves the Moral Guardians were right about that hip-thrusting Lothario the whole time.

His immortal supernatural heritage may be used to explain his "disappearance"; that is, Elvis is not dead, he just went to the Undying Lands.

Then again, sometimes there's no significance to it at all, it's just funny.

For some reason, no one ever makes these jokes about Elvis Costello. Perhaps it's because he doesn't have Presley's far more bitter, cynical sense of humor.