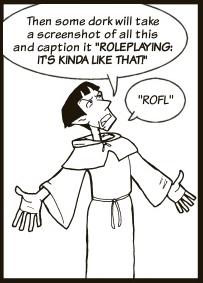 Roleplaying: It's kinda like that. ROFL.
"You idiots! This isn't imaginary play time! This is ROLEPLAYING! This is SERIOUS BUSINESS!"
— Lord Elf
Advertisement:

is a Webcomic by Josh Sortelli.

The comic follows the events in a roleplaying chatroom, which often deviate from the intended roleplaying, and parodies some personality types one's likely to find online, from the uptight moderator to the annoying and oblivious newbie. Later on, the characters move to a Massively Multiplayer Online Role-Playing Game, which slightly changes the previous character dynamics - for example, some actions can no longer simply be ignored as they were in the text-based chatroom.

The comic seems to have been set into an infinite hiatus on Monday, May 5, 2008 and has been discontinued since.

Tropes before the Genre Shift:

Tropes after the Genre Shift: