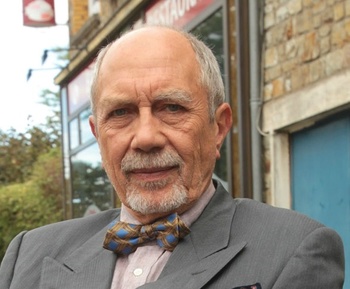 Looking for a deep, evil-sounding and/or smooth and suave French voice for your villains or charismatic leaders?

A prolific French theatre and television actor of Russian and Polish Jewish descent, he's been working since the 1970s, and he's had supporting roles in films directed by Woody Allen, Claude Zidi, Raoul Ruiz, Claude Lelouch, Pedro Almodóvar and Éric Rohmer, to name a few. He's equally at ease in French, English and Spanish, for that matter. His live-action roles include Major Pierre Ducos in Sharpe.

He is, however, most well known for his voice acting and French dubbing works. Most prominently, he has dubbed William Hurt (since 1994), Ben Kingsley (since 2010), Hugo Weaving (since 2001, excluding the Matrix series where he's dubbed by Vincent Grass), Jeremy Irons (since 2005), Frank Langella (since 2005), Ciarán Hinds (since 2005), Jonathan Banks (since 2006) and Tommy Lee Jones (2013), at least six times for each of them. Jafar in Disney's Aladdin, Elrond in The Lord of the Rings and Dr. Gregory House are among his most famous and beloved dubbings.

He has also narrated a number of nature and historical documentaries.