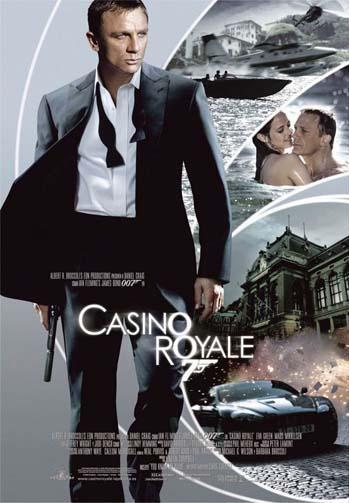 The one where it all began — again.

Casino Royale is the twenty-first film in Eon Productions' James Bond film franchise, the third Live-Action Adaptation of the very first James Bond novel, Ian Fleming's Casino Royale, and the second film to be directed by Martin Campbell in the series, introducing Daniel Craig as James Bond. It came out on November 16, 2006. Chris Cornell performed the Title Theme Tune, "You Know My Name".

Released four years after the much-criticized Die Another Day, the movie is essentially a Continuity Reboot for the franchise, serving as an Origins Episode of how Bond acquired his licence to kill and became the Tuxedo and Martini Secret Agent he is today. However, Eon still refer to it officially as the twenty-first film in the series.

In the film's expanded first half, Bond earns his 00- status and tracks down a terrorist financier known only as Le Chiffre. In the second half, adapted from Fleming's original novel, Bond must win a high-stakes game of poker against Le Chiffre to bankrupt the criminal and capture him. Along the way, Bond is nearly killed twice, gets tortured by Le Chiffre, and falls in love with the gorgeous accountant in charge of staking him in the game, Vesper Lynd.

The film also features several changes to the original novel in its second half, some of which have to do with the time period of the filming: The card game goes from Baccarat to Texas Hold 'Em Poker, the time period from the 1950s to the 2000s, the setting from France to a newly-independent Montenegro, and Bond from a Super OCD Shell-Shocked Veteran to a Wisecracking Sociopath, which makes the torture scene a different affair altogether. Lastly, the film exchanges Vesper's quiet final scenes and a long discussion between Bond and Mathis on the nature of evilnote (Oddly enough, this latter sequence is referred to in Quantum of Solace, in a brief exchange between Mathis and Bond when they reunite) for an action packed showdown in the grand canals of Venice.

Ian Fleming had sold the rights to the novel separately from the rest of the series, which is the reason that it took so long for a proper adaptation of it. The film was noted for being Darker and Edgier than most of the previous ones, with the fight scenes brutal and bloody, and the story hewing closer to a political thriller about tracking down the cash flow of terrorist organizations than an adventure yarn about a superheroic secret agent saving the world from megalomaniacs using elaborate home bases, kill sats and pilfered nuclear weapons. Additionally, Casino Royale is the first film since The Living Daylights nearly 20 years prior to be based on a James Bond publication by Ian Fleming.

Under absolutely no circumstances should you confuse this with the 1967 film of the same title, a zany parody with only a few scenes in common with the source material. Nor should you confuse it with the 1954 television movie/episode of the anthology series Climax!, which was a Compressed Adaptation of the novel to fit the hour-long format.

Followed by Quantum of Solace, one of the few direct sequels in the Bond film franchise.

The movie plays with this bit; a part of the actual narrative becomes the "Bond Shooting At A Gun Barrel's POV" scene.

The movie plays with this bit; a part of the actual narrative becomes the "Bond Shooting At A Gun Barrel's POV" scene.