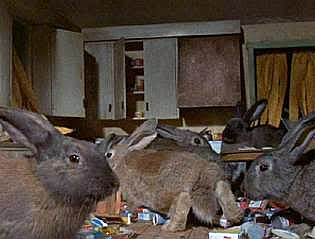 D'awww... I mean, RUN AWAY!
every "scummy sewer rat" used as set dressing in modern tv and film is a healthy, chubby lil boi with a nice shiny coat bc he lives a blessed little rat life full of fruits and nuts and tummy scritches
—tumblr user fieldbears [1]

The protagonist opens the cupboard in a haunted house and, terror of terrors, there's a rat inside. Everyone involved screams at the sight of the filthy diseased vermin. Except it looks like it's been recently bathed and brushed. And instead of fleeing or acting aggressive, it's looking expectantly at the actors for a treat. In really egregious cases it might even be white or multicolored instead of black or brown like a wild rat.

This is a Terrifying Pet Store Rat. While the animal in question is often a rat, it also applies to spiders, snakes, and anything else the audience is expected to react with fear or revulsion toward, despite the animal reacting like a pet. Spiders will saunter calmly over people instead of racing along in a panic. Snakes will crawl onto people's shoulders, staring them in the face comically instead of hissing and coiling defensively. Non-menacing animals can be an inversion of sorts, when an animal which should, itself, be terrified by events unfolding in-story instead acts calm, content, and eager for the treat its handler is dangling just out of frame.

This is generally caused by the fact that wild animals are really hard to work with. A wild rat might panic and flee realistically, but getting it to sit still long enough for the actors to show up is a challenge, as is anything involved in moving it. And the SPCA/Humane Society/local equivalent would be likely to object, too, since there's a much higher chance of the animal or human handlers being injured, which helps no one, so this trope is one of the Acceptable Breaks from Reality when it's done for safety's sake. So as far as most directors are concerned, a tame ball python that barely moves is usually a better choice than a deadly jungle snake, especially since no one will notice the difference anyway. Strangely, this often isn't averted with CGI, as fast, complex movements are expensive to animate. Very often crosses over with Misplaced Wildlife.

Tarantulas and scorpions used in film and TV tend to be docile species with very weak venom, since a more lethal species would obviously be more dangerous for the actors. This can give arachnologists or spider enthusiasts a Genius Bonus (alternatively, Somewhere, an Entomologist Is Crying) when they notice that the characters are freaking out about a harmless species.

A variant of this trope instead features common cats and dogs, either as themselves, used as stand-ins for wolves or wild felines, or put in costumes to represent monsters of various sorts. These will be intended to appear menacing, aggressive and dangerous, but the actual animal actors themselves will be tame and socialized animals. This often leads to dramatic scenes featuring supposedly vicious dogs with happily wagging tails, lolling tongues and other signs of excitement for play, or cats who will let themselves be picked up and handled or simply sniff, bat or investigate their putative victims, without a trace of the snarls and bristling fur of aggressive dogs or the folded ears and distinctive yowls and hisses of angry or scared cats — or, alternatively, the sounds of angry cats or dogs dubbed over animals that are clearly nothing of the sort.

This is a stock feature of horror movies, they often wander in the background for ambiance, act as a Cat Scare, or provide a Why Did It Have to Be Snakes? moment when a protagonist has to get past them. In severe cases, the central threat of a horror movie may fall into this trope. The main thing making this trope is that the animal is neither threatening nor believably wild.

Related to Reality Is Unrealistic, in that viewers accustomed to seeing only Terrifying Pet Store Animals on film are often shocked by how tick-ridden, mangy and scarred actual wild animals tend to be.