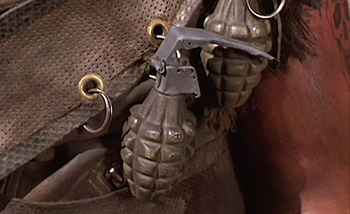 Notice anything missing?Answer It's the pin, it's gone.
Shannon: Guess you and her are engaged now, huh?
Druglord: What?
Sarah: Well, 'cause... (shows grenade pin) you just gave me a ring, mothafucka!
(Sarah flips the bird while Shannon drags both of them into cover)
Druglord: OH SHI—[boom]
— The Heat
Advertisement:

Not related to Tomato Surprise, though it can be related to chunky salsa.

The pin is pulled from a grenade on a grenade belt, putting the wearer and anyone in the immediate vicinity in danger of being blown up by their own grenade(s). At this point, one of two things will happen.

It can be used to elaborately kill a tooled-up enemy or as a makeshift suicide belt. Expect it to be used on a nearly triumphant enemy leading to a cathartic Oh, Crap! moment for the villain before he explodes.

Related to Grenade Tag in which a character during hand-to-hand combat secretly plants a bomb onto their opponent's body before quickly retreating. Both are a subtrope of Why Am I Ticking?

As for why it's called a Pineapple Surprise, British and American World War and Vietnam-era grenades were nicknamed "pineapples", due to their shape (note the trope image). Incidentally, WW2 German grenades were called potato mashers (they had a handle which increased their throwing range). Most modern grenades are spherical.

Compare Throw the Pin for when someone Too Dumb to Live manages to do this to themselves. May be averted if someone decides to make a Heroic Sacrifice by Jumping on a Grenade.