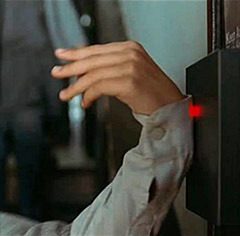 Works set in the future or depicting organizations with access to advanced technology often show that people have been injected with microchips to be identified or tracked. This can show technological advancement or a lack of privacy for the protagonists.

In darker works, a character may not recall being "chipped" and be alarmed when he finds one in his body, raising questions about who is tracking him and how it was installed.

Note that chips that aren't used for tracking or identification, such as the head jacks in The Matrix, don't count as examples.