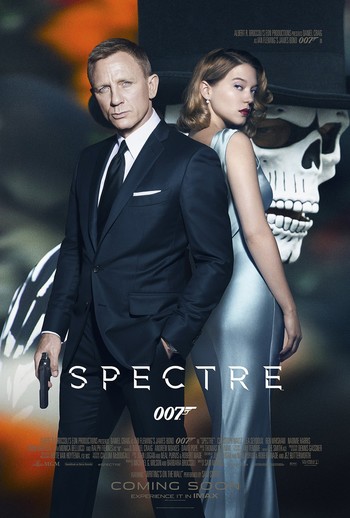 For you, I have to risk it all...
"Welcome, James. It's been a long time. And finally, here we are. What took you so long? Cuckoooo!"
— Franz Oberhauser
Advertisement:

The one where James Bond finally gets to fight Spectre again.

Spectre is the twenty-fourth film in the Eon Productions James Bond series, the fourth outing for Daniel Craig, the second film in the series to be directed by Sam Mendes and the direct sequel to Skyfall. The film was released on October 26, 2015, in the UK, November 6 in the US. Sam Smith performed the Title Theme Tune, "Writing's on the Wall", which became the first-ever Bond theme to hit #1 on the UK charts. It is the final Bond film co-produced and distributed by Columbia Pictures.

After being suspended for an unsanctioned hit in Mexico City, Bond discovers a cryptic message from his past that puts him on the trail of a sinister organization. While the new M battles political forces to keep the Double-0 section alive, Bond peels back the layers of deceit to reveal the terrible truth behind Spectre.

Followed by No Time to Die, a sequel that picks up where this film left off.

"Besides, I've got something better to do."
Feedback

Q, accompanied with a Precision F-Strike after seeing that Bond has stolen the Aston Martin DB10 and left a bottle of champagne in its place.

Q, accompanied with a Precision F-Strike after seeing that Bond has stolen the Aston Martin DB10 and left a bottle of champagne in its place.