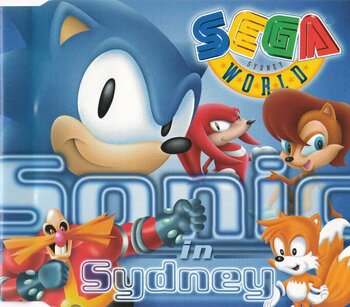 It's Sonic... IN SYDNEY!!
Advertisement:

The first version of the show, and the most widely known, was performed by costumed actors and dancers in the major roles. The show's plot is set in an alternate timeline based around the saturday morning animated series and the Sonic 3 video game where Dr. Robotnik's Death Egg crashes in Australia instead of Angel Island, causing him to attempt a takeover of Sydney with his freeze ray, changing all the Goodniks into his evil Badniks. With Sonic, Tails, and Princess Sally heading there to foil his plans. This version of the show received a soundtrack release on CD (which nowadays is the only way to know about this version). After Sega expressed disapproval for being very slow paced, extremely corny and not "dynamic" enough, they ordered this version to get a retool.

The second version of the show, informally termed the Sonic the Hedgehog Puppet Show, featured puppets of the characters and had new songs and a different plot. The story involves Robotnik creating what he thinks will be the ultimate robot to beat Sonic, but the resulting creation, Grounder, isn't too bright. With the help of Tails and Sally, Sonic defeats Grounder while Robotnik escapes. This version of the show never received a CD release and very little is known about it.

General information about both versions of the show, including pictures, can be found here

. The CD recording of the first version of the show, including all three songs and the entire show, can be heard here

These show contain examples of: