In Love with the Gangster's Girl 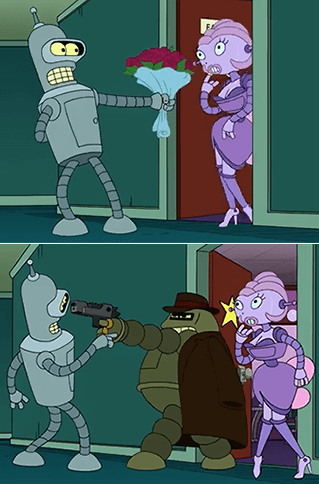 "Well, I'm boned."
Ada: I'm with you 'cause you're the only man 'round here not scared of them.
Freddie: Oh, I'm scared of them all right.
Ada: But you love me more than you fear them, right?
— Peaky Blinders
Advertisement:

Who is that? She's perfect. She's a vision. She's like no one you've ever seen. You've got to get to know her, to learn everything about her.

Wait. She's got a boyfriend? Oh, Crap!. And her boyfriend is that guy? It just got worse.

Many a tale has been told about a poor schmuck who fell in love with a beautiful woman, only to find out she likes someone very dangerous. Usually, the dumb cluck will persist in trying to win her heart and "take her away from all this". Depending on where the story lies on the Sliding Scale of Idealism Versus Cynicism, our hero may get the girl in the end and get away clean, or one or both of them may end up very, very dead. Or he may do the sensible thing and get out while the getting's good. But then there wouldn't be much of a story, would there?

Sometimes both of the guys in this rather deadly Love Triangle are crooks, but the one with the relationship is someone higher up on the food chain, whether by being higher up in the criminal hierarchy (such as The Don in a mafia story) or by being vastly more dangerous than the other.