Film / The Cook, the Thief, His Wife and Her Lover 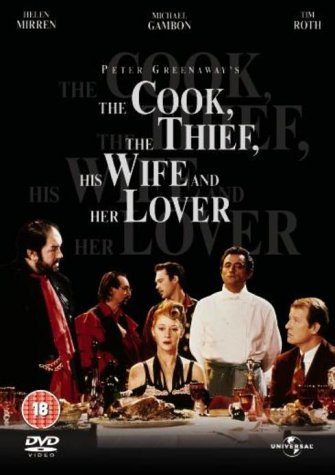 "Try the cock, Albert. It's a delicacy. And you know where it's been."
— Georgina
Advertisement:

English mafia don Albert Spica is the owner of the high-class La Hollandais restaurant, of which Richard Borst is the head chef. Georgina is Albert's wife. Every night, Albert flies into rages and forces other patrons out of the restaurant, in addition to subjecting his enemies to sadistic tortures (such as rolling around in dog manure). This is to Georgina's chagrin. Georgina's eye eventually catches Michael, a shy bookshop owner who regularly dines at the restaurant. With the help of the restaurant staff, the two carry out a torrid affair, sneaking off to the kitchen or women's bathroom to have sex whenever they can. Unfortunately, Albert finds out, and his vengeance against Michael is slow and painful, but so is Georgina's against Albert when she finds out.

Notable for its sets; consisting solely of gray back-alley, green kitchen, red dining room, white women's bathroom and Richard's bookshop, in which the outfits of the characters change color to conform to; and for its X (and later, NC-17) rating in the US. Theories regarding the film's meaning are diverse; but the popular consensus seems to be that it is a metaphor for the oppression of the poor by the rich and by governments; with Richard representing the poor masses and Albert the oppressive upper class. More particularly, it is popularly regarded as criticism of the tax laws of Margaret Thatcher.