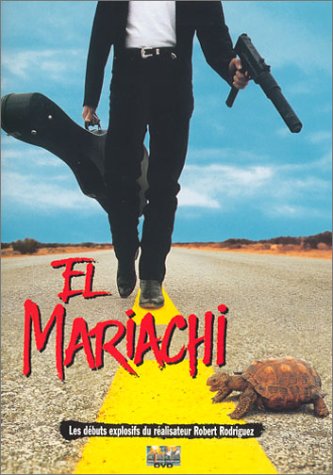 El Mariachi is a 1992 independent film by Robert Rodriguez. It is his first feature length film, and the first of the Mexico or Mariachi Trilogy, followed by Desperado and Once Upon a Time in Mexico.

A mariachi searching for work in Mexico ends up getting mistaken for gangster Azul. Azul has been marked for death by a former associate Moco, and Azul is trying to kill Moco first. Things get much worse for our protagonist when he starts living with Moco's love interest and his guitar and case get switched for Azul's guitar case of guns.

This film is quite well known for being made on a budget of a mere $7,225, which is very low by Hollywood standards — Rodriguez states that the Columbia Pictures logo that appears before the movie cost more than the movie itself took to make. Rodriguez made almost half of this money by volunteering for experimental clinical drug testing. In the extras on the DVD, Rodriguez explains the techniques that he used to save money during the making of the film, including using a wheelchair in place of a dolly and using the actors not involved in scenes in place of a regular film crew.

This Movie contains examples of: