Film / The Girl Can't Help It 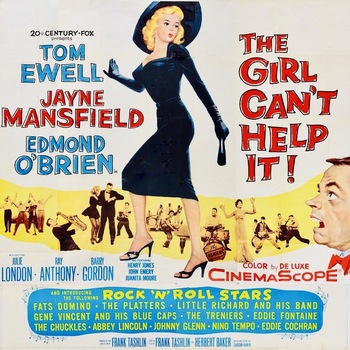 She was born to please!
"Our story is about music, not the music of long ago, but the music that expresses the culture, the refinement and the polite grace of the present day."
— Tom
Advertisement:

Tom Miller (Ewell) is a down-on-his-luck music agent, called in to help former gangster Marty "Fats" Murdock's (O'Brien) girlfriend Jerri Jordan (Mansfield) make it big in the music business. Of course things get complicated when those two fall in love, and it turns out Jerri doesn't even want to be a singer. Can they get Murdock to understand the latter and not find out about the former?

The film, directed by former Warner Bros. animation director Frank Tashlin and intended as a vehicle for the sex symbol Mansfield, is also notable for its embracing of rock and roll, as it has many actual recording stars of the time perform their hits. The film also inspired John Lennon and Paul McCartney of The Beatles to get into music, so this film is one of the causes of The British Invasion.