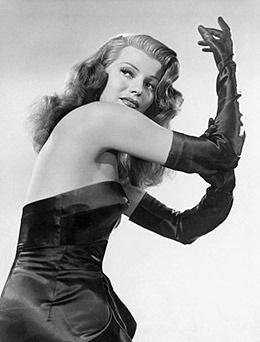 These are a type of High-Class Gloves that are elbow-length or longer, usually reaching to the upper arm or even the shoulder, and worn by women as an accessory, usually to a formal outfit such as an evening gown or wedding dress. The "elbow-length or longer" part is the key; gloves which cover a substantial portion of the forearm, up to just below the elbow, can legitimately be called "long gloves" or "evening gloves", but never "Opera Gloves".

Most popular during the Regency Era (roughly 1790 to 1814, so you'll see them in a lot of Jane Austen adaptations), the late Victorian Era, The Gay '90s and The Edwardian Era (roughly 1870 to 1914), and the World War II years through the early Sixties. Mostly confined to "specialist" fashions since then (wedding gowns, debutante outfits and the like), though there was a minor revival in the 1980's.

Opera Gloves are usually associated with the following character types (not an exclusive list, but these are the types most frequently seen wearing long gloves:

As noted, Opera Gloves are closely associated with the aristocracy and royalty, especially during the 1870-1914 period, (in fact, gloves in general have been a symbol of royalty and authority for millennia) and many fictional queens, princesses and noblewomen will be portrayed as wearing them as part of their dresses (would be Gorgeous Period Dress, but those were worn in Real Life as well). Also, in the late Victorian era these were required with "full décolleté" (low-necked and short-sleeved) evening dresses worn to Operas and other formal events, to avoid showing too much bare arm. Yet the gloves themselves are Simple, yet Opulent compared to those dresses; plain white kid leather is one of the most frequently used materials, and the material considered the most appropriate for gloves to be worn with formal dress. More elaborate materials, decorations and bright colors (or even black leather) are usually reserved for less formal contexts.

Opera Gloves are often paired with strapless gowns, as a way of emphasizing the wearer's bustline.

Commonly paired with a Pimped-Out Dress, Everything's Sparkly with Jewelry, Pretty in Mink (whether a fur wrap or fur coat), Parasol of Prettiness, Of Corsets Sexy.

There is a trend in Regency and Victorian period dramas in which every woman except for the heroine wears gloves, even in the obligatory ballroom scene. This is purely directorial license, probably meant to symbolize an 'open' or 'unconcealed' nature. In fact, in a Regency or Victorian ballroom setting the wearing of gloves would be considered almost a mandatory prerequisite to participate- people did not want to directly touch the (often quite sweaty) hands of their dance partners.

As this is a useful notes page, there will be no examples