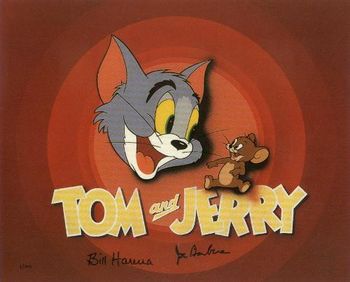 Their smiles in this picture do not reflect the characters' usual relationship.

Tom the cat and Jerry the mouse, the stars of a long-running series of short theatrical cartoons produced by MGM during The Golden Age of Animation, were the first characters created by William Hanna and Joseph Barbera. In the duo's first short, "Puss Gets the Boot" (1940), the cat's name was Jasper and the mouse, though left unnamed onscreen, was dubbed Jinx by the animators.note Hanna and Barbera would later use the name Mr. Jinks for the cat in their T&J Expy short series, Pixie, Dixie and Mr. Jinks.

On September 25, 1965, CBS introduced Tom and Jerry to television, broadcasting an Animated Anthology on Saturday mornings featuring the original '40s and '50s MGM shorts; this series ran until 1972. Throughout the 80's and 90's, Tom and Jerry cartoons often ran in syndication, usually alongside Droopy, Barney Bear, And MGM's other cartoons and one-shots, usually with the duo taking Top Billing and the others simply listed as "and Friends".

From 1975–77, Hanna-Barbera produced a less violent Tom and Jerry anthology for ABC, supported by a new character, the Great Grape Ape. This was followed by Filmation's 1980–82 version on CBS, which used the classic slapstick formula. Both of these series were poorly received however. Another series, Tom & Jerry Kids, ran on the Fox network from 1990–93 to much better reception. From 2006 to 2008, The CW's animation block included Tom and Jerry Tales, which continued with the slapstick humor of the theatrical shorts, as did a series of direct-to-video films. Tom and Jerry Tales was canceled after 4KidsTV took over Kids WB, but the movies have continued.

Tom and Jerry provides examples of: