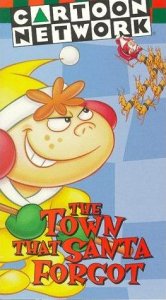 Looks like it's Santa who'd "better watch out", doesn't it?
Advertisement:

The Town Santa Forgot is an Emmy-nominated Christmas Special that started off as a poem written by Charmaine Severson, titled Jeremy Creek. The Animated Adaptation was produced by Hanna-Barbera and originally aired December 3, 1993, on NBC. Narrated by Dick Van Dyke, it has since been made available on VHS and been shown annually in Cartoon Network (before its Network Decay) and Boomerang's Christmas marathons.

The main character (and titular character of the original poem) is a Spoiled Brat by the name of Jeremy Creek, who always wants every toy he sees and is prone to throwing tantrums if he doesn't get it. Eventually, his parents get sick of it and tell him they're not buying him any more toys. Jeremy then writes a mile-length letter to Santa Claus, in which he lists every toy he can think of, and mails it in the middle of June. When Christmas Eve arrives, he goes up on his family's roof to watch for Santa, but to his dismay, the big guy passes him by without leaving anything.

What Jeremy doesn't realize, though, is that when Santa received his letter, he assumed that, since no one kid could possibly want so much stuff, that Jeremy Creek was in fact the name of a place. And it was - to be more exact, it was the name of a swamp town that Santa had never before visited (hence the title). Thus, he had in fact brought the toys Jeremy wanted to the kids who live in the swamp town. When Jeremy finds out about this through a TV report on Christmas Day, he is at first outraged by this. But upon hearing how much the kids of the swamp town are willing to thank whoever wrote to Santa about them, it makes him feel better than any gift ever could. Following this, the now-nicer Jeremy shares his toys with the rest of the kids in his neighborhood and even joins Santa on his annual gift-giving journey every year (until he eventually outgrows his seat in the sleigh).