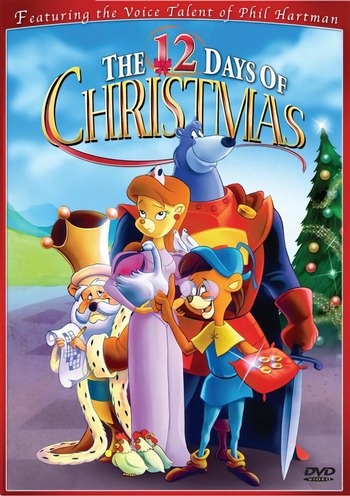 ''On the first day of Christmas, my true love sent to me...

"The Twelve Days of Christmas" is a 2D animated Christmas special, first airing on NBC in 1993.

Narrated by a partridge, this animated tale explains the lengthy and confusing Christmas carol of the same name. A brave and boorish knight named Sir Carolboomer wishes to marry the beautiful yet closed off Princess Silverbelle. In an attempt to win her heart, he steals what he thinks is a Christmas list, but turns out to be the answers to the King's crossword puzzle. He mistakenly enlists his long suffering servant Hollyberry to find every item on her bizarre list, including a partridge in a pear tree, eight maids a milking, four calling birds… you get the basic idea. As to be expected, Hilarity Ensues.

The special provides examples of: