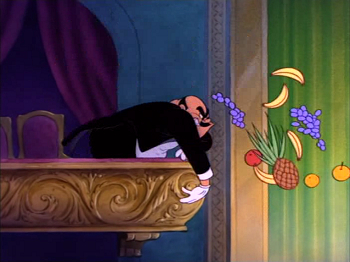 Rigatoni felt the ham on stage could use a salad.
"Why is there always someone who brings eggs and tomatoes to a speech?"
— The Penguin, Batman Returns
Advertisement:

A displeased crowd is throwing stuff at speakers and artists according to the Rule of Funny. Eggs, lettuce and vegetables are generally favored, with tomatoes an all-time favorite. Originates from way back in the 19th century, when audiences and working-class theatergoers would often carry these things into the (very rowdy by our standards) theaters, and chuck them (or chairs and such) at bad performances. Look for an Honest John-type character to have a cart filled with said rotten vegetables for sale for this particular purpose. This is usually followed by a Vaudeville Hook yanking the bad performer off-stage.

See also Stock Punishment and Defiant Stone Throw. Related to Egging, Pie in the Face and Food Slap. A subtrope of Food Fight and Edible Ammunition.

If Larry does nothing but stand on the stage, the crowd gets angry with him and starts tossing some green veggies and tomatoes at him.

If Larry does nothing but stand on the stage, the crowd gets angry with him and starts tossing some green veggies and tomatoes at him.