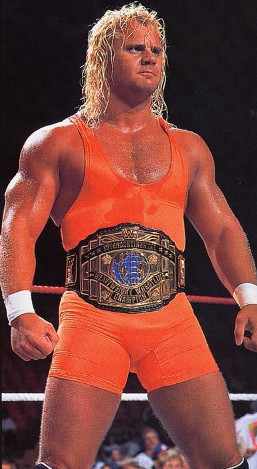 One of the greatest Intercontinental Champions of all time.
Absolutely perfect.
"You have just witnessed perfection."
—Mr. Perfect, after winning a match
Advertisement:

Curt Michael Hennig (March 28, 1958 – February 10, 2003) was a wrestler who debuted in the American Wrestling Association in 1981 after being trained by Brad Rheingans, Larry Hennig, and Verne Gagne at the promotion's training camp. He'd later debut for the WWF four months into his career and work their on and off until the early '90s, eventually developing his "Mr. Perfect" gimmick. He then left WWF behind, working for enterprises such as WWC, All Japan, New Japan and eventually winding up in WCW but was, and still is, counted among the best technical wrestlers in WWE history.

Among his in-ring achievements, he was a 1x AWA World Heavyweight Champion

w/Barry Windham. Briefly competed in TNA when it was still a member of the NWA. He passed away in 2003 from acute cocaine intoxication. He was inducted into the WWE Hall of Fame in 2007.