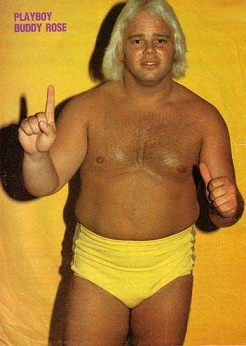 Paul R. Perschmann (November 27, 1952 – April 28, 2009) was an American Professional Wrestler and trainer as "Playboy" Buddy Rose. He debuted in 1973 after training under Verne Gagne and Billy Robinson and competed primarily for the NWA Pacific Northwest territory in Portland, the AWA and for WWE, as well as in Hawai'i, San Francisco, and other territories in the US and Canada as well as for New Japan Pro-Wrestling. He has the dubious distinction of losing the first-ever WrestleMania match, as the masked Executioner to Tito Santana. Among his in-ring achievements, he was a former AWA World Tag Team Champion