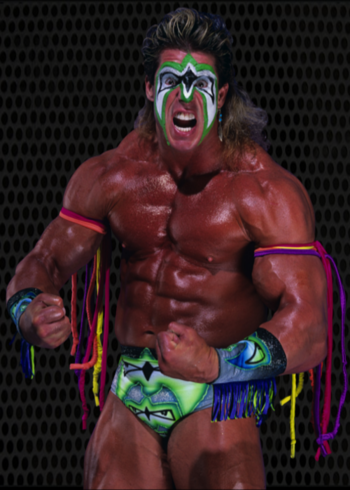 "YOU ARE GOING TO NEED AN ENERGON CUBE THE SIZE OF WYOMING TO DEFEAT MY AUTOBOTS, HOAK HOGAN!!" * BUTTONS! BUTTONS! WHO'S GOT THE BUTTONS?! IF YOU WANNA BE MY LOVER, YOU GOTTA GET WITH MY FRIENDS!! MAKE IT LAST FOREVER, FRIENDSHIP NEVER ENDS, HOAK HOGAN!! YOU HAVE LESS CHANCE THAN TWO FIGHTERS AGAINST A STAR DESTROYER! THE BISTRO HAS COOKED UP YOUR LAST MEAL AND IT'S THE SAUCE OF DESTRUCITY THAT FLOWS THROUGH THE GOOEY AND GRAVY VEINS OF THE WARRIIIIOOOOOOOOR!! SKROOONK
Advertisement:
"No WWE talent becomes a legend on their own. Every man's heart one day beats its final beat. His lungs breathe their final breath. And if what that man did in his life makes the blood pulse through the body of others and makes them believe deeper in something larger than life, then his essence, his spirit, will be immortalized by the story tellers, by the loyalty, by the memory of those who honor him and make the running the man did live forever. YOU! — YOU! — YOU! — YOU! You are the legend makers of Ultimate Warrior."
—The Ultimate Warrior's final promo, WWE Raw, April 7, 2014

Warrior (born James Brian Hellwig; June 16, 1959 – April 8, 2014), best known by his WWF ring name The Ultimate Warrior, was one of the most famous names of Professional Wrestling from the late '80s and early '90s thanks to an uncanny and unprecedented meteoric rising to fame. Best-known for his appearances in WWE, where he had his most famous matches, first defeating The Honky Tonk Man for the WWE Inter Continental Heavyweight Championship

at WrestleMania VI. Back then he was seen as the next big legend of wrestling, the next Hogan, so to speak. His gimmick is bit hard to describe but, put simply, he's an incomprehensible new-age nut who acts as sort of spirit channel for various great warriors across history.

Unfortunately, he became infamous for being somewhat of a Cloudcuckoolander in Real Life, having legally changed his name from Jim Hellwig to Warrior in order to use it outside the WWE, his short-lived comic book containing bizarre imagery and Walls of Text, his disastrous run in WCW in the late '90s, again feuding with Hogan in what is now seen as one of the worst pay-per-view matches in the history of pro wrestling, and his nonsensical promos.

On January 13, 2014, he was finally announced as a WWE Hall of Fame inductee. Sadly, he passed away on April 8, 2014, a few days after being inducted into the WWE Hall of Fame, with his last appearance on Raw the day before his death.

"LOAD THIS SPACESHIP WITH THE ROCKET FUELS... LOAD IT WITH THE TROPES AND GET READY TO EMBRACE DESTRUCITY, DUDE!!!"

"YOU HAVE JUST WITNESSED THE POWER THAT MAKES THE SKIES CRUMBLE AND THE EARTH SHAKE... THE POWER OF THE WARRIOR... <SKROOOONNNK>!!!"
Feedback