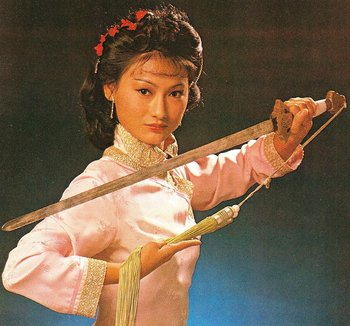 Both Kara and her older twin brother, Austin Wai, grew up in the shanty district of rural Hong Kong, dropping out of school at age 12.

The Wai siblings joined Shaw Brothers at an early age, with Kara often appearing as extras. During the shooting of Dirty Ho (1979), Kara, who was a background character, was promoted to a bigger part after the original lead actress quits the shoot, and from there she proves her potential as a leading star. The studios, having most of their higher-profile Action Girl-actresses such as Cheng Pei-Pei and Lily Ho leaving or refusing to take part in more action-orientated roles, decide to groom Kara as their most suitable replacement.

Her portrayal of the eponymous character in My Young Auntie would later earn her a Best Actress Nomination in the 1980 Hong Kong Film Awards.

It's worth noting that Kara's ex-dance instructor, Mak Bo-sim, whom she trained under at age 14 is Donnie Yen's mother, making Kara one of Donnie's old friends.