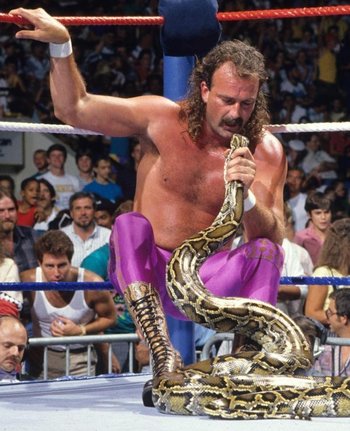 Image depicting a cold-blooded, predatorial being... and his python.
"Yeah, reach out for me! I'm a snake! Never trust a snake!"
—WWF Superstars
Advertisement:

Aurelian Jake Smith Jr. (born May 30, 1955) is a second-generation professional wrestler best known as Jake "The Snake" Roberts. He started his career in various NWA territories before finally establishing himself within the WWF. From late The '80s to late The '90s, he feuded with their top tier talent. Lauded for his mic work, cutting dark and cerebral promos, bringing his live pet snakes into the ring, and for inventing the dreaded DDT maneuver.

"Stone Cold" Steve Austin, who was on the cusp of breaking out and just needed a really good catchphrase, defeated Jake to win the King of the Ring Tournament in 1996. In Austin's victory promo, in where the supposed born-again Christian Jake referenced John 3:16, Austin struck gold with the following:

"You sit there and you thump your Bible, and you say your prayers, and it didn't get you anywhere! Talk about your Psalms, talk about John 3:16... Austin 3:16 says "I just whipped your ass!""
Advertisement:

Unfortunately, years of family troubles and drug abuse (and his resulting in-ring behavior) made him more famous for DWIs than DDTs, marking him as poison (or venom, if you will) in the eyes of the big companies. As a result, he has had trouble maintaining steady employment, though he has worked consistently on the road as an independent agent.

Among his in-ring achievements, he is a former Stampede North American Heavyweight Champion

. He was also the only true "winner" of the Million Dollar Belt (See "Loophole Abuse" below.) in WWF. Inducted to both, the WWE Hall Of Fame Class of 2014

and the Professional Wrestling Hall of Fame and Museum Class of 2020.

In March 2020, Jake showed up on the post-Revolution episode of AEW Dynamite, revealing that he'd joined the promotion as a manager for a new talent who was coming next week (revealed to be Lance Archer) and cutting a vicious promo on Cody Rhodes.