Film / Beyond the Mat 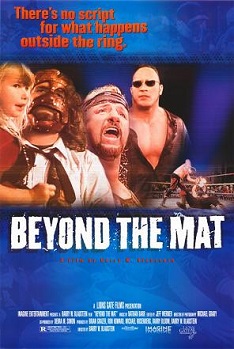 Beyond the Mat is a 1999 documentary by filmmaker and wrestling fan Barry Blaustein, profiling the careers of several prominent wrestlers and touching on many more as they attempt to make it from the bottom of the totem pole to the top, in gory, grueling detail.

The main focus is on three wrestlers, all different in how they approach their career but all willing to punish their bodies for the entertainment of their fans, and to the horror of their families.

Also features Paul Heyman of ECW, back when he was still promoting from his parents' basement (or at least it seems like it).

ALSO features Jim Cornette briefly, and Roland Alexander, a promoter and the head of the All Pro Wrestling school in Heywood, California.