Film / Beyond the Line of Duty 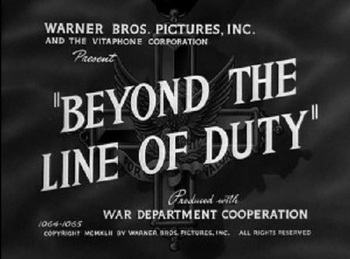 Beyond the Line of Duty is a 1942 short film (22 minutes) directed by Lewis Seiler.

It is the story of Capt. Hewitt Wheless. Wheless, who stars as himself, was an American bomber pilot. The short sketches out his decision to join the Army and his qualification to become a bomber pilot. Having already joined the peacetime army and qualified as a bomber pilot, Wheless is in the Philippines when the Japanese strike in December 1941. Wheless's bomber is one of five sent to bomb Japanese troop transports. Wheless's mission becomes highly hazardous when Wheless's bomber is delayed, forcing Wheless to attack the Japanese troop transports alone.

Typical of the propaganda shorts made during the war to bolster American morale. Future President of the United States Ronald Reagan, himself judged unfit for combat service due to poor eyesight, provides narration.