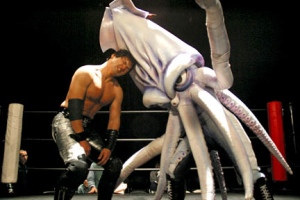 A championship match between two Japanese wrestlers has just come to an end, and the belt is about to be handed over, when suddenly a giant squid takes the stage! The squid proceeds to take down the new champion, and claim the belt for himself. This single brazen act sends the squid skyrocketing to fame, he'll have to fight off the managers who don't want him fighting, the wrestler he defeated the first time, a giant octopus his own size, and a similarly giant mantis shrimp. Even as public opinion of him soars, can he beat the odds?

The film is entirely in live action, with rubber costumes for the monsters, cheesy monster film special effects, a romance plot intertwined, and two real-world championship wrestlers on the film's starring cast. The end result is hilariously bizarre comedy!