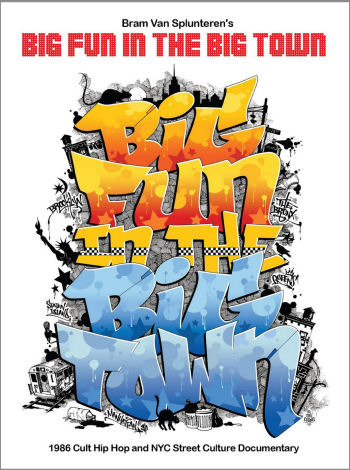 Big Fun In The Big Town is a 1986 TV documentary made by the Dutch production company VPRO for Dutch television, directed by Bram van Splunteren and hosted by Belgian TV presenter Marcel Vanthilt, who would later become world famous as a veejay for MTV. It talks about Hip-Hop at a time when the genre was finally breaking through to the mainstream with the success of the single "Walk This Way" from Raising Hell by Run–D.M.C.. Many famous hip hop artists of the old school hiphop era are interviewed, including Grandmaster Flash and the Furious Five, Run–D.M.C., Doug E Fresh and the inspirational pioneers The Last Poets. The crew also talks with several hiphop artists who at that time were still unknown, but would gain more fame later, like LL Cool J, Roxanne Shante, Biz Markie, MC Shan, Russell Simmons, Mr. Magic and Schoolly D.
Advertisement:

Apart from interviewing a veritable "who is who" in early hiphop "Big Fun In The Big Town" also features a lot of footage of rap acts recording in the studio or performing on stage or even in the streets, with a memorable bit where Doug E. Fresh beatboxes in front of the camera. Seeing that hiphop would finally reach a global audience and crossover to the white suburban market soon afterwards, the episode is quite an interesting time capsule of this transition period.

Interestingly enough Big Fun In The Big Town was one of two documentaries about popular music the crew shot in New York City. The production company actually had more interest in the director's documentary about Iggy Pop, who was already a huge star worldwide. Seeing that the footage with and about Iggy was shot quickly and efficient director Van Splunteren decided to use the remaining time in the USA to shoot more footage and interviews about the local hiphop scene, a genre that was dear to him but hadn't quite caught on in his home country. Ironically enough the hiphop documentary would become a Cult Classic in the Netherlands, while the Iggy Pop contribution was met with a lacklustre reception and is nowadays completely forgotten.

At the time of its broadcast, November 30, 1986, "Big Fun In The Big Town" got a enthusiastic reception by Dutch and Flemish viewers. Despite being only 40 minutes long the documentary is credited with singlehandedly popularizing hiphop in the Netherlands and many Dutch hiphop acts still refer to it as their main inspiration. For instance, quotes from Schoolly D in this documentary are heard during the track "De Wet van T.O.K.I.O" on the Dutch band Osdorp Posse's album "Harde Kernramp" (2000).

Big Fun In The Big Town provides examples of: