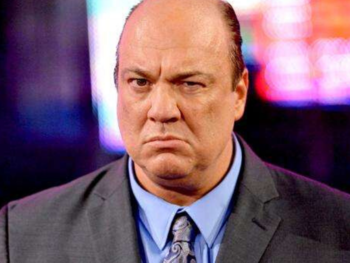 One of the Greatest Minds in Professional Wrestling.
"Ladies and gentlemen, my name is Paul Heyman..."
"THIS, my friends...IS E! C! F%*KING! W!!"''
"ROOOOOOOOOOOOOLL-ER-BAAAAAAAAAAAAALLLL!!"
Advertisement:

He first broke into wrestling as a photographer in Memphis, similar to Jim Cornette. He first appeared in AWA and later on WCW as "Paul E. Dangerously", a yuppie sports agent who managed The Dangerous Alliance Power Stable. After departing from WCW, Heyman was hired by the then-Eastern Championship Wrestling promotion (then part of the NWA) to help then-lead booker Eddie Gilbert, but shortly afterwards he assumed charge of the creative direction of the company following Gilbert's departure and eventually outright buying it. A year later, the company, the flagship promotion of the struggling NWA, broke away to become its own entity, and was rechristened as Extreme Championship Wrestling.

This rapid career rise, almost unheard of in the business, had a sticky wicket attached: Heyman was now managing literally everything, resulting in a lack of corporate synergy and rapid burnout. Just before ECW folded, he sold off the company's assets and secretly entered talks with WWE, a move deemed cold-blooded but necessary by insiders.note In the final days of ECW, Heyman did not even appear on the show, and was replaced as the leader of the backstage and creative by Tommy Dreamer. After ECW finally entered into bankruptcy in 2001 (just weeks after WCW was sold to WWF), Heyman became a broadcaster for the WWF, and during that time, he recreated ECW as a stable, which would become the Alliance after it merged with WCW during The InVasion Angle. Heyman was "fired" following the 2001 Survivor Series when the Alliance lost a do or die match that marked the end of the angle.

He was briefly a booker for SmackDown before becoming its onscreen general manager and would later head the revived ECW brand. He would depart from the company after a behind-the-scenes dispute with Vince McMahon over ECW's only pay-per-view under WWE post-revival, December to Dismember. He returned to WWE in May 2012, as the hype man for Brock Lesnar, and would also align himself with CM Punk before later becoming his rival. He is the manager for Roman Reigns since August 2020.

These tropes will be taken to the EXTRRRRREME!: