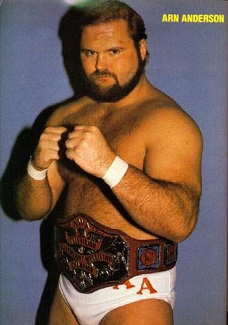 "Adversity introduces a man to himself."
Advertisement:

Martin Anthony Lunde (born September 20, 1958) is a retired American professional wrestler from Rome, Georgia best known as Arn Anderson. He debuted under his own name in 1982 and wrestled for various independents around the Southeast before arriving in Southeastern Championship Wrestling in Alabama in 1983. He had a small run as the masked Super Olympia. He was given the name of Arn Anderson name because of his physical resemblance to Ole Anderson (Al Rogowski). He is best known for his work in the mid-1980s and 1990s as a member of The Four Horsemen. He stayed with Jim Crockett's National Wrestling Alliance territory until Crockett sold it to Ted Turner in late 1988, leading to Anderson, Tully Blanchard and manager James J Dillon jumping to WWE. (Dillon would be part of the office until he returned to WCW in 1997 because he couldn't keep up with Vince McMahon's work ethic.) Anderson and Blanchard ("The Brain Busters", with manager Bobby "The Brain" Heenan) would hold the WWE World Tag Team Titles

before losing them back to Demolition in 1989. Anderson returned to WCW in 1990 and competed until neck and back injuries forced him to retire in 1997. He would work backstage as an agent until the bitter end in 2001, a role he continued in WWE until 2019. He now works for All Elite Wrestling.

Among his in-ring achievements, he is a 4x former NWA/WCW World Television Champion

. He is often considered one of the best wrestlers never to hold a major singles title.

"You're gonna get a dose of Anderson and tropes — Horsemen Style!":