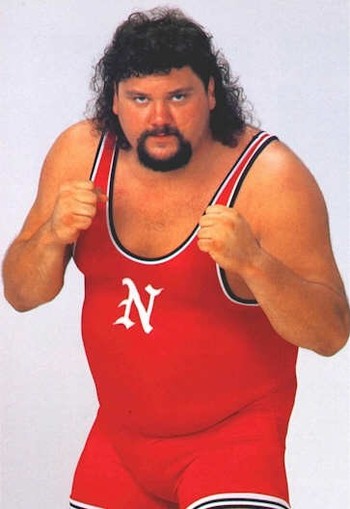 "Anytime, anyplace, you want it? I'll take you any-fucking-where!"
— Gary Albright after winning a match.
"9 out of 10 of Gary's opponent's wind up on stretchers when they go out of the ring."
— Ted Pelc, UWF-i English Commentator.
Advertisement:

Gary Albright (May 18, 1963 – January 7, 2000) was an American professional wrestler best known for his work in Stampede Wrestling, Universal Wrestling Federation and All Japan Pro Wrestling. He first started as an amateur wrestling star, setting several records as a NCAA in the University of Nebraska before turning to pro wrestling. Training under people like Lou Thesz and Billy Robinson, he signed up to Stu Hart's Calgary-based Stampede Wrestling, mainly wrestling as a foreign heel named Vokhan Singh. After the closure of Stampede in 1989, he travelled to Japan and joined the shoot-style promotion UWF International, where he became famous to Japanese audiences as a frightening superheavyweight gaijin who knocked people dead with his suplexes. He was one of the few people who got a clean victory over the famed Nobuhiko Takada, headlining many events and giving birth to legendary feuds. When he could not get more from UWF, he switched to Giant Baba's All Japan Pro Wrestling, where he teamed with guys like Stan Hansen and "Dr. Death" Steve Williams and challenged Toshiaki Kawada among other highlights. However, tragedy struck around that time when Albright collapsed on a ring and never got up again. He was pronounced dead due to a heart attack, leaving behind a widow belonging to the Samoan Anoa'i wrestling family and an impressive legacy in the history of puroresu.