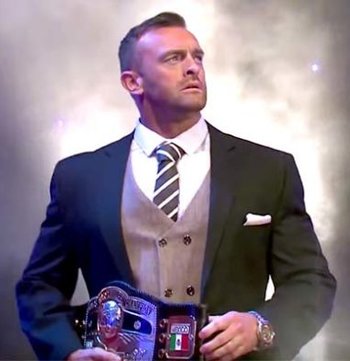 "In 1986, the kingdom of East Anglia saw the birth of their greatest son. An Anglo-Saxon warrior, destined to be a champion for the ages and a national treasure for all time."
Advertisement:

Nicholas "Nick" Aldis (born 6 November 1986) is an English professional wrestler. He is best known for working in TNA under the ring name Magnus. He competed there for over eight years since 2008, slowly climbing up the card before becoming TNA's world champion in late 2014.Trivia  Interestingly, he was the other half of AJ Styles's last match with TNA in a match to decide the undisputed TNA World Heavyweight Champion (Styles had left TNA in-storyline while champion and Magnus won the title in the interim; the match was needed when Styles's in-storyline leave became a real one). Afterwards, Styles would move on to New Japan Pro-Wrestling, and later, WWE. He departed the company in 2015, but was still featured peripherally thereafter due to competing under his real name in Jeff Jarrett's Global Force Wrestling promotion, eventually winning the GFW world title as well. His association with both ended in late 2017 after Anthem, a Canadian promotional group, made moves to purchase both promotionsTrivia Their attempt to purchase TNA caused severe legal wrangling between themselves and Dixie Carter, who wanted an investor but not an ownership partner, and Billy Corgan, who held a minority stake and was pushing for full control following alleged contractual breaches by Carter. Anthem eventually bought them both out and became sole owner. Negotiations with Jarrett for GFW began swimmingly, and TNA programming began a period of unification, introducing GFW wrestlers and titles and holding title unification bouts with the idea of presenting Global Force as the "face" of TNA moving forward. However, Jarrett abruptly pulled out of the deal. Eventually, TNA rebranded simply as Impact Wrestling. and refused to offer him a long-term contract.

Aldis moved on to the indie scene, competing in House of Hardcore, CZW and other promotions, before being approached by Billy Corgan, who had by now become the owner of the National Wrestling Alliance. Aldis thereafter became the centerpiece of Corgan's new NWA rebranding. He won the NWA Worlds Heavyweight Championship in early 2018 and would defend it across four continents and multiple promotions, including CZW, New Japan Pro-Wrestling and Ring of Honor before losing the belt to Cody Rhodes at All In in September of that year, albeit he would regain it weeks later.

Aldis also appeared on the United Kingdom revival of Gladiators, where he was known by the name Oblivion.