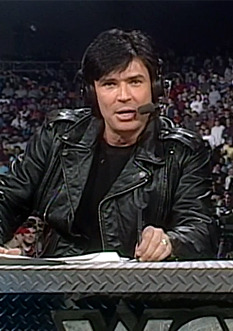 The man who was the
face of WCW.
“Controversy creates cash.”
— Bischoff 101.
Advertisement:

Eric Aaron Bischoff (born May 27, 1955) is an American model (seriously), businessman, booker, and commentator best known for managing WCW from 1993-99. He was a top general in the Monday Night Wars of pro wrestling.

He invented modern wrestling. Bischoff is the reason the cruiserweight division existed in WCW, and were it not for that division, Eddie Guerrero, Chris Jericho, Rey Mysterio, etc. would not exist in the same capacity. Bischoff set the template for a three-hour wrestling show (standard for WWE since 2001), with actual competitive matches being shown. He was doing pyro and large indoor sets well before WWE were. The criticism that Bischoff was only successful in using talent who were built up elsewhere is valid, but then WCW used them better than WWE did. "Diesel's" main event run was one of the worst drawing periods for WWE, while Kevin Nash's main event run was WCW's most profitable year ever.

His downfall was his ego, not his intelligence. Also, they were constantly losing money due to the nWo guys forming a mini-union to squeeze out the competition, and massive money contracts with huge guarantees for people who "didn't draw a dime". Giving them creative control in contracts was his biggest mistake of all.

WWE would emerge victorious in the ratings war. In 2002, Bischoff resurfaced as the General Manager of Raw. Though he held no actual power, he portrayed a great heel and was greeted by a chorus of boos whenever he spoke. He also unveiled the Elimination Chamber and Money in the Bank, both of which are still active. In 2009, Bischoff negotiated a deal with TNA. He played the same on-screen/off-screen role as he did on Nitro, before eventually being sent home to sell beer. (Bischoff doesn't pull any Scott Halls but he does own his own brewery.)

In June of 2019, Bischoff was brought back into the WWE fold as the new head of creative at SmackDown Live, most likely to prevent AEW from hiring him — same as Paul Heyman. He got paid to move to Connecticut, eat catering, walk around and "observe" for four months. Then he was let go. Ironically, the next time he would be seen on a wrestling show was on the 5th August 2020 episode of AEW Dynamite, making a well-received guest appearance as the judge of the "AEW Super Wednesday Debate" between Chris Jericho and Orange Cassidy and appearing on TNT again for the first time in nearly 20 years.

Opinions on Bischoff within the community are split down the middle. He's the only creator to go toe-to-toe with Vince McMahonnote speaking strictly about Vince's main show, Monday Night RAW, and for that he is still considered a hero by many.

On March 18, 2021, Bischoff and the world both learned that he would be inducted into the WWE Hall of Fame.

I'm back, And I'm troper than ever: