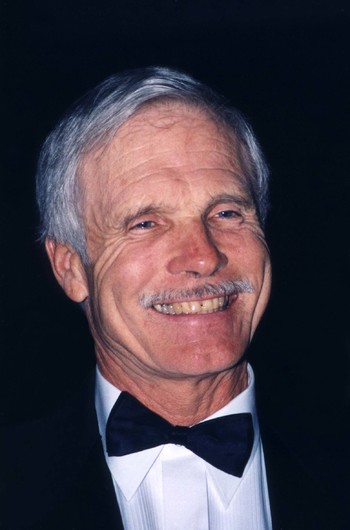 Robert Edward "Ted" Turner III (born November 19, 1938) is a man who helped to revolutionize television and film in many, many ways, and it is likely that if it hadn't been for him, our world might be a lot different. You can easily see him as the American counterpart of Rupert Murdoch, albeit a lot friendlier. His longtime nickname is "The Mouth of the South", and depending on your feelings towards him, it can be endearing or demeaning. He is also a prominent modern example of the Renaissance Man.

Born in Cincinnati, Ohio, he was the son of billboard magnate Robert Edward Turner II and attended Brown University— only to get kicked out for having a girl in his dorm room. He returned to Georgia and worked at his father's company, only for him to become head when his father committed suicide in 1963. He turned his dad's company into the largest billboard-advertising firm in the Southeast. But this was merely a stepping stone; flush with cash, he started buying television stations, specifically WJRJ, channel 17 in Atlanta, and WCTU channel 36 in Charlotte, NC. He renamed both, to WTCG (for Turner Communications Group) and WRET (for Robert Edward Turner) respectively, and turned the flailing stations around by programming them with older reruns, movies and sports. By 1976, he bought the MLB's Atlanta Braves to provide built-in programming, and still later bought the NBA's Atlanta Hawks.

But his breakthrough came when, following in pay-TV network Home Box Office's example, he decided to uplink WTCG to satellite for cable viewers nationwide to watch. This was an instant success, and WTCG— renamed to Superstation WTBS (for the renamed Turner Broadcasting System) in 1979— was the first basic cable channel. note WRET was sold around this time— after having taken the NBC affiliation— and without Turner's support, the station fell on its butt, as new owner Westinghouse/Group W inexplicably sought to sabotage the station's success by preempting nearly all NBC programming, cutting local news down to a single midday bulletin, and reducing the power of the station's transmitter; it was left struggling for a few years before new ownership turned it around, though WCNC, as it was renamed eventually, still struggles in the ratings.

Turner was now on the map, and sought to capitalize on it. In 1979, he announced the formation of the world's first 24-hour news channel. He bought an old country club in Midtown Atlanta on Techwood Avenue for the new venture (moving WTBS into the facility in the meantime)note the front facade was used as the logo for Turner Pictures and Turner Home Entertainment in the 1990s, leading to the nickname of the "Turner Mansion", and on June 1st, 1980, the Cable News Network, or just CNN, launched and... well, it wasn't an instant success, but gradually people began catching on to it and by the time of the first Gulf War in 1991, the channel proved it was ingrained in the American consciousness, as people stayed on its 24-hour coverage. It gradually began expanding internationally and with a variety of spin-off channels and ventures, although not all of them have worked. CNN2, later renamed to Headline News, was launched in 1982 (taking the satellite space of a failed CNN rival, ABC and Group W's Satellite News Channel), as a 24-hour service dedicated to rolling news headlines. In 1987 CNN moved out of the Techwood facility and into a largely-vacant office complex in downtown Atlanta; redubbing it the CNN Center, it helped to revitalize the Downtown Atlanta area and is a major tourist attraction (though in recent years CNN has moved most of its programming to its bureaus in NY and DC; the CNN Center continues to be used by HLN and the other CNN networks).

Turner's success continued, but in 1984, Turner had one of his few overall failures: an MTV competitor called the Cable Music Channel, which failed after five months due to cable systems not carrying the channel, MTV's dominance of recording artists, and other factors. As a result he sold the satellite space to MTV, which used it to launch VH1 in 1985.

But this didn't deter Turner, who continued his other successful ventures and in 1986, made his biggest purchase yet: that of the storied Hollywood studio Metro-Goldwyn-Mayer and its sister studio, United Artists. But after 74 days, he returned them to former owner Kirk Kerkorian, due to a crushing debt load (which ultimately required a bailout financed by cable operators and other media companies). But he shrewdly kept a very valuable asset— MGM's film library, encompassing not only MGM-produced films, television shows and cartoons, but also material from Warner Bros. (the studio's pre-1950 library, color Looney Tunes and Merrie Melodies cartoons made prior to August 1948, and all Harman and Ising-produced Merrie Melodies), Paramount (The Fleischer/Famous Studios-produced Popeye cartoons), and the US/Canadian rights to the RKO Radio Pictures library, totaling well over 7000 titles. He used this to not only supply WTBS with programming, but also start another new network, TNT (Turner Network Television), which would focus on not only these catalog titles, but also air expanded sports coverage to supplement TBS, special events and original programming (partially as a result of his failed efforts to purchase CBS in 1985). And of course, it launched with the first cable telecast of his favorite film, Gone with the Wind (which he now owned).

But he also had a nasty habit during this time: colorizing old black-and-white movies, which was decried by cinephiles and TV viewers alike. He did have a good goal in mind when commencing colorization — he began to have movies to be transferred from film that could be worn out or broken, to more durable formats like videotape for future preservation, and at the same time had colorized versions of those films made (primarily because other television stations were more likely to buy the rights to color films than black-and-white titles; Turner didn't even start the process). He eventually stopped the habit not only due to the bad press, but also because it was far too costly. Thankfully, this did have some positive consequences, in that it gave a big boost to the film preservation movement, and helped inspire the creation of the National Film Registry. He then established Turner Classic Movies in 1994 to showcase these catalog titles unedited, uncut and uninterrupted, much to cinephiles' relief and joy, as TCM has never wavered from this goal and is seen as one of the shining examples of averting Network Decay.

1991 saw him acquiring legendary animation studio Hanna-Barbera, resulting in the 1992 launch of Cartoon Network, a 24-hour animation network which utilized the library of Hanna-Barbera and the cartoons of MGM, Warner Bros. and Paramount he owned already; eventually expanding into original programming by the end of the decade. Hanna-Barbera was refocused in time to provide original programming for the Turner networks and its final broadcast series, an adaptation of fellow Turner property New Line Cinema's Dumb and Dumber aired on ABC in 1995.

1993 saw the acquisition of both Castle Rock Entertainment, Rob Reiner's creator-focused film studio, and New Line Cinema, a mini-major studio which had attained fame for movies like the Nightmare on Elm Street franchise; just prior to the buyout New Line had helped distribute the Epic Movie Gettysburg, which had been financed by Turner himself after ABC rejected the original miniseries proposal.

But the biggest change came in 1996, when Turner Broadcasting merged with Time Warner, owner of Warner Bros., HBO (ironically), Time Inc. and its collection of magazines, cable systems, and various other media assets. With this merger, the halves of the WB library were reunited, allowing Cartoon Network and TCM access to the rest of the WB library. As a result of the merger, Turner grew farther and farther away from the day-to-day operations of his networks.

2000 saw the infamous merger of Time Warner with America Online, which Turner initially agreed to, but as the merged AOL Time Warner began posting huge losses as a result of the dot-com bubble's bursting, he realized that this was a bad idea; unfortunately for him, he had been reduced to a mere figurehead, holding no power in the company's operations. This realization resulted in the sale of World Championship Wrestling (WCW), which he had purchased in 1988, to World Wrestling Entertainment (WWE), as a consequence of WCW's huge losses — Turner couldn't protect them anymore. Turner ultimately left the company in 2003.

As for Turner Broadcasting itself, it would chug along for the next 16 years before it met its virtual end in a 2019 shakeup of WarnerMedia. Cartoon Network, its sister channels Boomerang and Adult Swim, and Turner Classic Movies had their operations transferred to Warner Bros., Turner Sports and CNN were merged into a newly-formed WarnerMedia News and Sports group (alongside the AT&T SportsNet RSNs), while the remnants of Turner Broadcasting, which included TNT, TBS, and truTV, were merged with HBO to form WarnerMedia Entertainment, effectively dividing Turner's media empire into parts.

Since then, he has focused on other goals, including sailing (a lifelong pastime of his), peace initiatives, and environmentalism, amongst others. He is a huge conservationist and has bought acres of land in Montana and other states to raise bison on. And of course he was one of the co-creators of the environment-themed cartoon Captain Planet and the Planeteers. He has been married three times, most notably to Jane Fonda for most of the 1990s.

So no matter what you may think of his views, there is no denying that Mr. Turner has had a huge influence on how we communicate, play and work, and his legacy continues to grow and inspire.

Also, he really hates Rupert Murdoch — back in 1983, a Murdoch-owned sailing ship caused Turner's vessel to run aground in an Australian regatta, and in response, Turner challenged Murdoch to a televised fistfight at Caesar's Palace in Las Vegas. And he offered the fistfight again in 2003, after he criticized Murdoch's backing of the War in Iraq.

Assets of Turner Broadcasting ({*} indicates it has been sold off or shut down) include: