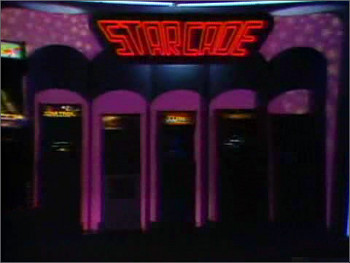 ...damn.
Humanoid, your moves are so fresh
Your presence is requested for the ultimate test
Hop on board and turn my key
We're gonna flash back to A-T-3
Rock my controller, don't get played
You are the new master of Starcade!
-Opening segment shown before each episode on G4TV from 2002-04
Advertisement:

In the early 1980s, Video Games were huge...and so were Game Shows. In 1981, JM Productions got the great idea to merge the two. The result was Starcade, which originally ran from 1982-83 on Superstation WTBS and 1983-84 in syndication (via Turner Program Services). Unlike most game shows, this show was recorded in San Francisco, CA, the centerpiece for technology and video games in America.

Two contestants (sometimes two teams of two) played three rounds. Each round began with a toss-up question about a video game, such as "The first event in Alpine Ski is A) Downhill Ski or B) The Slalom Race" answer (Downhill Ski). The person/team who got the question right picked which of the five arcade games they would face off on. The players then got anywhere from 40-60 seconds to score as many points as possible. After three rounds, the player/team with the higher score advanced to the final round and chose one of the two unused games; if they could beat the average score of 20 other players within 30 seconds, they won the day's grand prize.

The video game theming continued with the prizes- aside from the grand prize, runner-up and bonus prizes consisted of Colecovision consoles, home computers, Pac-Man wall clocks, handheld games, and the like.

All in all, Starcade was the first of its kind: a pioneering game show centered on video games (as announcer Kevin McMahon put it in early episodes, "a game show for today") that managed to survive The Great Video Game Crash of 1983 and inspire such shows as Video Power and Nick Arcade. USA Network was in talks about a revival in 2006, but never picked it up...thankfully, since "They Changed It, Now It Sucks!" would definitely have been heard among the Starcade community.

Years later, the G4TV cable network (before its merger with the now-defunct Tech TV) picked up the show for repeats; despite being much older than the rest of the lineup, Starcade fit in perfectly and served to plug the then-new official Web site

made by the show's staff, filled with information and many full episodes plus clips of the unaired pilots. Not only does it continue to be updated from time to time, but episodes and clips are also on YouTube. Surprisingly, after having been absent from television for over 17 years, the show returned to G4's schedule upon the network's relaunch in November 2021.

Thanks to the Web site and the reruns on G4, Starcade has become popular as not only a good game show, but also a sizable chunk of 1980s gaming nostalgia for those who remember the era (and a fun history lesson for those who don't). And of course, there's always MAME. Indeed, this article

puts it as the predecessor to the current E-Sports craze.

It has been announced that

on, appropriately enough, Twitch in late August of 2017, and have also uploaded episodes on their website.

Not to be confused with the actual arcade at Disneyland, the former marquee PPV of WCW (which is instead spelled Starrcade), or a Web Video series about Star Wars video games hosted by JonTron.

"This is Kevin McMahon speaking. Starcade is a JM Production."