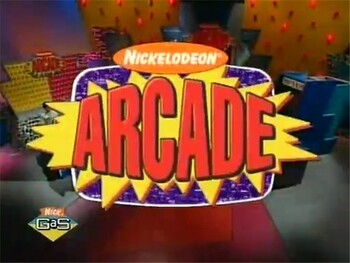 Nick Arcade is a Game Show that was produced for Nickelodeon in 1992. It was hosted by Phil Moore. The main part of the show consisted of a game board divided into 18 squares. Two pairs of contestants controlled a kid named Mikey, leading him to the goal to get points and avoid the enemy.

The most notable part was the "Video Challenge" squares, where one of the teammates got up to a wall of "arcade machines" (which usually had NES, SNES, Sega Genesis, TurboGrafx-16, and Neo Geo games) and participated in a timed challenge on that game. Viewers could be treated to kids failing hard at collecting rings in Sonic the Hedgehog, or the poor sap who chose Super Ghouls 'N Ghosts.

This show is notable for not only being one of Nick's many game shows that they created during the late 1980s and early 1990s, but having Joey Fatone as a contestant.

On October 26, 2014, a copy of the original pilot for the show, courtesy of series co-creator Karim Miteff, resurfaced.