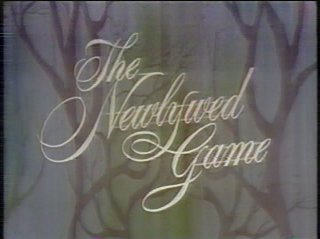 "From the Chuck Barris stages in Hollywood, California... here come the newlyweds!"
Advertisement:

The Newlywed Game is the Game Show that sent Bob Eubanks to stardom. This Chuck Barris production debuted in 1966 on ABC, coinciding with a pre-emption of CBS' then-popular Password. Four couples, all married for less than two years, answered questions that bordered on the bawdy. In the first round, the wives predicted their husbands' answers, and the second round reversed the roles.

Some modern viewers know the show best for Eubanks' supposedly Unusual Euphemism for sexual intercourse, "whoopie". This impression is probably due to modern viewers' Small Reference Pools, since the euphemism was very well-known in the 1970s — it comes from a 1920s pop tune that was covered more than 300 times between 1930 and 1975. It was only when the popularity of the euphemism faded in the 1980s that Eubanks' use of it became notable.

At the end of the show, the couple with the most points won a prize that had been selected just for them. In truth, each Newlywed Game couple declared in advance which prize they wanted to win, and each episode featured four couples who had chosen the same prize. (It was never a car.)

Carnie Wilson was the original host of the current Newlywed Game on GSN, which debuted in 2009 and reduced the competing couples to three; she was replaced by The View's Sherri Shepherd in 2010. It was announced in September 2009 that the show would start featuring same-sex couples. Among its roster have been celebrities such as George Takei of Star Trek, Davy Jones of The Monkees, and Christopher Knight of The Brady Bunch.

They did match their answers, didn't they?

They did match their answers, didn't they?