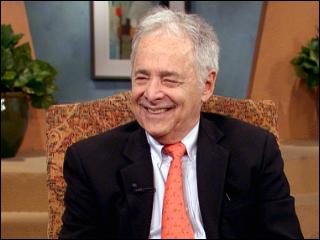 "One piece of pie is delicious. Fourteen pieces are obviously nauseating."
—Chuck Barris, in a TV Guide article on the overloading of Game Shows.
Advertisement:

Charles Hirsch "Chuck" Barris (June 3, 1929 – March 21, 2017) was a sometimes-controversial Game Show producer whose work was mostly pastiches of the genre. His library of shows is currently owned by Sony Pictures Television (via their acquisition of Guber/Peters in the early 1990s; they had bought Barris' company in 1989).

Shows produced by Barris include:

Under the Guber/Peters name, they created the following shows and pilots:

open/close all folders
Confessions of A Dangerous Mind
"My name is Charles Hirsch Barris. I have written pop songs, I have been a television producer. I am responsible for polluting the airwaves with mind-numbing puerile entertainment. In addition, I have murdered thirty-three human beings."

An alleged autobiography in which Barris claimed he was using his work as a Game Show producer to hide his activities as an assassin for the U.S. Central Intelligence Agency. This was a brilliant claim on Barris' part as, while the CIA requires all of its employees to sign an agreement never to publish anything without getting Agency approval, if they actually tried to enforce the agreement they'd be admitting that they engaged in assassinations (violating a presidential directive). So when the CIA reportedly said that Barris has never worked for the Agency, it probably wasn't believed.

In 2002 it was the subject of the directorial debut from George Clooney, which starred Sam Rockwell as Barris and was adapted by Charlie Kaufman.

"I came up with a new game-show idea recently. It's called The Old Game. You got three old guys with loaded guns onstage. They look back at their lives, see who they were, what they accomplished, how close they came to realizing their dreams. The winner is the one who doesn't blow his brains out. He gets a refrigerator.
The Big Question
A novel set in 2012 where Barris (now old, crippled, penniless, and long since forgotten) shares his last great idea with a young producer: The Death Game, a big-money quiz where contestants compete to determine a winner who is then asked a single (impossible) question for big money (if correct) or death by poison (if incorrect). The young man likes the idea so much that, after Barris turns down a deal, he contacts his mob friends and has the cripple buried alive; the show is renamed The Big Question, with its debut night contestants being the many characters the book has been following between the portions about the producer, Barris, and the show.

Airing live on NBC, pretty much rigged to hell and back without the contestants' knowledge, and hosted by a stereotypical "all-smiles" emcee, The Big Question is billed as the next big thing and most of America is glued to their screens. The "winner", a sweet old lady named Vera Bundle who was just beginning to experience life again, gets the final question wrong (as the producer had planned). Shortly afterward, Vera gives a "The Reason You Suck" Speech to the doctor administering the poison - after which the doctor forces the poison down her throat; Vera dies soon afterward.

A massive outcry begins against the show and NBC, presumably because almost nobody knew about the whole "death" element. While The Big Question manages to stay on the air despite this, it eventually gets canned after just three episodes,