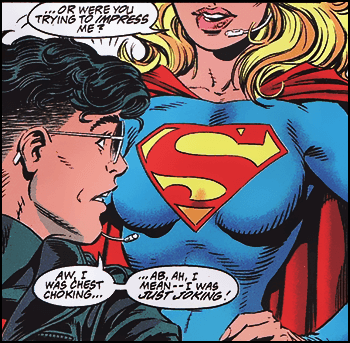 Busted.
"One of my patients had a rather amusing Freudian slip: he was having dinner with his wife, and he meant to say 'pass the salt', but instead he said 'You've ruined my life, you blood-sucking shrew.'"
— Niles Crane, Frasier (and numerous others)
Advertisement:

A Freudian Slip is, as one wag has put it, "when you say one thing and mean your mother". It is an involuntary word substitution that supposedly reveals something you're repressing, hiding, or simply trying not to talk about. As such, it's a perfect tool for the comedy writer.

What the Freudian slip hides is called Shadow Archetype. Often these turn out to be Innuendoes or other sexual references, both for Rule of Funny and to give the characters an opportunity to observe that Freud Was Right.

Compare That Came Out Wrong and Accidental Innuendo, which are usually completely innocent and not noticed until someone says "Heh Heh, You Said "X"" or "That's What She Said". Contrast Lampshaded Double Entendre, which is quite intentional. Compare and contrast with the Fauxdian Slip, in which a character wants to openly express what the character making the Freudian slip is holding back on. See also Boggles the Mind, which plays mostly the same role in a different context.

See also Does This Remind You of Anything?, which includes subtexts that are only visible to the audience. Compare Have a Gay Old Time, when this occurs when a word's meaning changes over time. Compare You Just Told Me.

Suspiciously Specific Denial is totally not related, because it's not also about revealing more than you meant to say, or anything like that.

This is where you put the penises. I mean examples:

In the same episode, "Swastika."

When Brian and Stewie try to speak to Tom Tucker about his son, Jake, getting Chris in trouble at school, Brian inadvertently mentions Jakes..."condition".

When Brian and Stewie try to speak to Tom Tucker about his son, Jake, getting Chris in trouble at school, Brian inadvertently mentions Jakes..."condition".