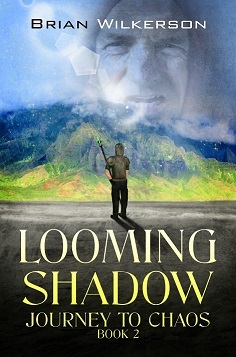 You are young, you are a student of magic, you live in the shadow of previous mages, and you have The Trickster's attention...Yes, I'd say you are very much like Dengel.
Advertisement:

Looming Shadow by Brian Wilkerson is the second book in the Journey To Chaos series. It picks up where book one left off, with protagonist Eric Watley desperate to return to Tariatla, a land where using magic is as common as learning to ride a bicycle. The life of a humble mercenary is no longer available to Eric after his previous adventures in this foreign land, and a whole new adventure filled with monsters, magic and darkness awaits him now. Despite the danger and the looming return of the villainous Dengel, Eric’s enthusiasm for magic will help him see through all the trickery and deception that stands in his way.

Looming Shadow is the sequel to A Mage's Power and the second book in the Journey to Chaos series. It follows the fallout of the conclusion of the previous book while continuing to build the Constructed World of Tariatla.

The next book in the series is Mana Mutation Menace.